A Separate Vegetarian Canteen for IITs and IIMs? 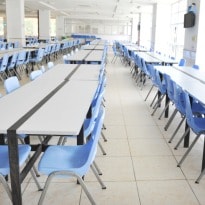 The Human Resource Development Ministry has forwarded a proposal to establish a separate eating space for vegetarians across IITs (Indian Institute of Technology). According to an NDTV report, "On October 15, an undersecretary in the HRD ministry, AK Singh, had in a covering letter asked IITs and IIMs to consider a proposal for separate eating areas for vegetarian and non-vegetarian students."

A similar request was sent from a Katni-based trader S K Jain, who demanded a separate eating space and mess for students consuming vegetarian food. Jain's letter has been forwarded to IITs along with a cover letter from the Ministry.

Jain is a member of Rashtriya Swayamsevak Sangh. In his letter marked to HRD minister, Smriti Irani, he opined that, "children who eat non- vegetarian food have saddened their parents by their 'tamasic' behaviour. They are deviating from the Indian value system because food has direct correlation with their thoughts."

The government has received over 25 requests of a similar nature. The HRD Ministry has clarified that it makes no recommendation or suggestions and plainly forwards the request it receives. It is up to the IITs to decide on the feasibility of the proposal. "We will have to see, if it is not possible what we can do," said S.K Gupta, Dean, students welfare.

It is interesting to see how the plea is being made not by the students, but from various organizations that support vegetarianism. One can just wait and watch, as the final call rests with the management committee of respective institutions.