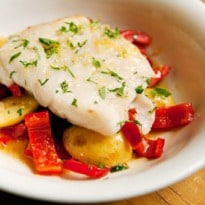 This tasty fish goes wonderfully well with peppers that have been blistered in the oven for a lovely roasted flavour.

Sustainable cod is easy to source and delicious with roasted peppers.

Add the new potatoes to a small saucepan filled with cold water, season, bring to the boil and simmer until cooked.

Reserve some oil for cooking, then beat the rest together with the white wine vinegar until emulsified.

Place the peppers in a baking tray with the rosemary, garlic, a splash of oil and some sea salt, then put in the oven on a medium to high heat until the skin blisters. Remove from the oven (leaving oven on), place in a bowl and cover with cling film (they will continue cooking and it will be easier to peel them). Allow to cool slightly, peel the skins, remove the seeds, and cut into strips.

Add a splash of oil to a non-stick frying pan on a medium heat, season the cod and place skin side down for two minutes, followed by four or five minutes in the hot oven, depending on the thickness of the fillets.

Drain and halve the potatoes, mix with the peppers and vinaigrette, place in a large dish with the cod on top. Finish with the chopped parsley and lemon zest.

• Angela Hartnett is chef patron at Murano restaurant and consults at the Whitechapel Gallery and Dining Room, London. Twitter.com/angelahartnett