Call for a Ban on Eating Cats and Dogs 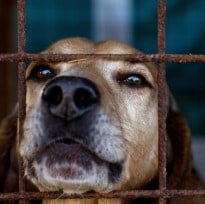 According to a local Swiss newspaper 'The Tages Anzeiger', communities in and around Rhine valley and other areas in Switzerland are serving dogs and cats for dinner. Dog meat goes mostly into making sausages and is looked upon as a fatty remedy for rheumatism. Cats get cooked for Christmas in the same style as rabbit and the most popular breed of dog that's eaten is a close relative of the Rottweiler. If reports are to be believed, Switzerland also has a thriving trade for cat's fur and they're also among the world's biggest consumers of horse meat.

Local and international animal welfare activists are enraged on the issue and are currently pressing the Swiss government to roll out a law that would term this activity as illegal. At present, the Swiss law doesn't have pet animals under the purview of its animal welfare law. Though commercial sale of meat of such creatures is not legal, their killing isn't looked upon as illegal until the method used is proved to be an act of cruelty.

It's important to note that in the past, Switzerland has been lauded for its animal welfare laws. It was the first country to ban battery cages used in poultry farming and egg production way back in 1992. EU banned conventional battery cages only in 2012. The Swiss also made sure that those who keep pet dogs undertake proper training to look after their pets better.

"Around three percent of the Swiss secretly eat cat or dog," said Tomi Tomek, founder and president of animal protection group SOS Chats Noiraigue. "We especially see it in the regions of Lucerne, Appenzell, Jura and in the canton of Bern.", she added. The group has already gathered a 16,000-name petition to outlaw the eating of pets. It also forced a ban on the sales of cat fur in the year 2013. Notable people who signed the petition included French actress Brigitte Bardot, who has dedicated her life to fighting for animal rights.
Listen to the latest songs, only on JioSaavn.com
There's a flip side to this story, with locals saying consuming dog and cat meat isn't any different from eating other animals like chicken, pork, beef or goat. They say some of the communities in countries like China, Vietnam and Korea have been consuming dog meat since forever and some nations especially rear a specific breed of dog for consumption.

Questions are been raised about the ethics of getting home an animal, providing it with shelter and care and then slaughtering it for consumption. PETA is of the opinion that, "When it comes to feeling pain and suffering, there is no difference between a dog, cat, cow or chicken."

Comments"We are asking simply for a paragraph in the law on protecting domestic animals. A political leader told us parliament won't do anything unless people revolt," Tomek said.