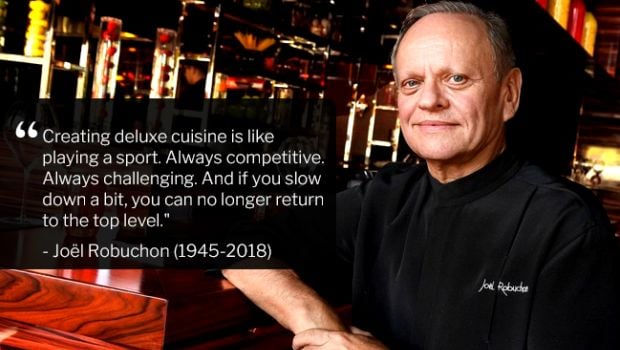 French celebrity chef Joel Robuchon has passed away on Monday, at the age of 73. The chef, who is known across the world for having the most number of Michelin stars, was suffering from pancreatic cancer and was being treated for the same for over a year. Chef Robuchon finally succumbed to the deadly disease in Switzerland today, sending waves of shock and sadness around the world. He had been named the "Chef of the Century" by restaurant guide Gault Millau in the year 1989 and had a restaurant empire spanning three continents. His restaurants were located in some of the most prominent cities around the world like Las Vegas, Shanghai and Tokyo. Chef Robuchon was known to have mentored many other great chefs, including celebrity chef Gordon Ramsay. Touted as one of the greatest chefs of all time, Chef Joel Robuchon had also hosted several culinary shows on French television.

1. "Creating deluxe cuisine is like playing a sport. Always competitive. Always challenging. And if you slow down a bit, you can no longer return to the top level." (1996 Interview with LA Times)

2. "The older I get, the more I realise the truth is the simpler the food, the more exceptional it can be... and it's the hardest thing to do in a kitchen. It really asks for a mastery of the ingredients and a mastery of taste." (2014 interview with Business Insider)

3. "When a dish works, it works for everyone, whether you're Asian, European, African, American or anybody else." (2010 interview with Wall Street Journal)

4. "Very often, when I see talent in a new chef working for us, I would ask him this question, 'If you are cooking for your parents, boyfriend or friend, would you cook it the same way? I want my team and myself to cook as if we are cooking for the family and very good friends." (June 2018 profile in Michelin Guide)

5. "Success is ephemeral, you need to reach out for it. I work hard every day to bring it out." (Exclusve interview with Michelin Guide Digital)

6. "Ah... I do have this vision that if I ever get to heaven, someone will sit me down and say, 'This is our menu for today.' But I'd be quite happy with a baguette with some fantastic cheese and a glass of wine." (2013 interview with Telegraph)

The gastronomy world may have lost the brightest star in the food galaxy today, but these words of Chef Joel Robuchan will continue to be the guiding light for future generations of chefs and food experts, for millennia.