Under the new position, Chef Vinesh will be vested with task of ensuring smooth functioning of future events 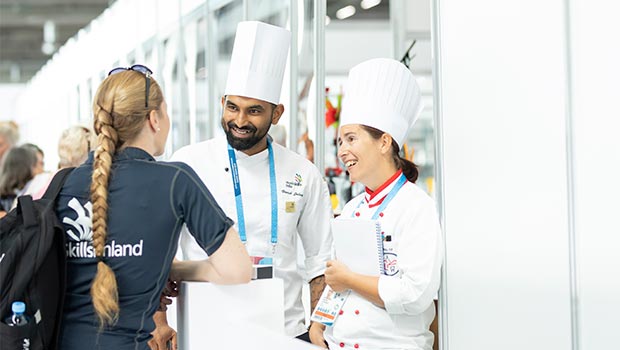 The extravagant Indian cuisine is popular across the globe this development is just another proof of it. The WorldSkills extravaganza closed yesterday, with an address by the Russian President himself. India rounded off a great run with a total of 19 medals. An additional feather in our cap was the appointment of renowned pastry chef, Vinesh Johny, as the Deputy Chief Expert for pastry and confectionery at WorldSkills International, 2019. This appointment comes on the concluding day of the five day-long event that brought together talent from across 56 domains and 60-65 countries. Chef Vinesh has been a Government of India appointed WorldSkills Mentor since 2017, and his expertise has brought many laurels to the nation. He has led India to a Silver win in Patisserie in the first event at Abu Dhabi, and has trained two students along with fellow Chef Avin, successfully positioned 5th in the patisserie segment amid tough competition this year.

Under the new position, Chef Vinesh will be vested with task of ensuring smooth functioning of future events. He will also train many more enthusiasts under the Patisserie and Baking segments.

Speaking about WorldSkills and his vision for the new appointment, and his responsibilities, Vinesh said, “Events of this calibre not only help you set personal aspirational benchmarks, but also drive healthy collaboration and growth between professionals. We started Lavonne Academy with the aim of offering international level training in India, and the talent we have seen till date is massive. It is time for us all to work together as an ecosystem, and share expertise, just like we have been doing with each participant who we have trained for this event. WorldSkills brings so many different art forms together while enriching us as educators, with a hope to create more international level talent!”

As the Co-founder and Chief Executive, Lavonne Academy of Baking Science & Pastry Arts and Founder of Lavonne Cafe, Vinesh has been instrumental in driving the establishment of a rapidly growing set of pastry and baking professionals from India, and make a strong impression among internationally educated peers. Along with the newly added title to his name, the chef is known for his achievements like-

A few months ago, Chef Vinesh launched his new product innovation #MoodPills at the Forbes 30 Under 30 Summit, Hong Kong. #MoodPills are chocolate infested pills that focus on human emotions and fight anxiety, stress and depression. These pills come in 6 colours highlighting 6 emotions to elevate to a healthy mood with just one bite!

Every two years WorldSkills hosts the world skills competition which attracts more than 1,600 competitors from more than 60 countries. At this event, young people from all corners of the globe gather together for the chance to win a prestigious medal in their chosen skill. There are competitions in 56 skills across a wide range of industries — from joinery to floristry; hairdressing to electronics; and auto body repair to bakery. The competitors represent the best of their peers and are selected from skills competitions that are held in WorldSkills members' countries and regions.

The Competition also provides leaders in industry, government, and education with the opportunity to exchange information and best practices regarding industry and professional education. New ideas and processes inspire school-aged youth to dedicate themselves to technical and technological careers and build a better future.