Delicious Indian Thali: An American chef who is also an Indian food enthusiast took on the task of painstakingly creating an entire Indian thali from scratch at home. 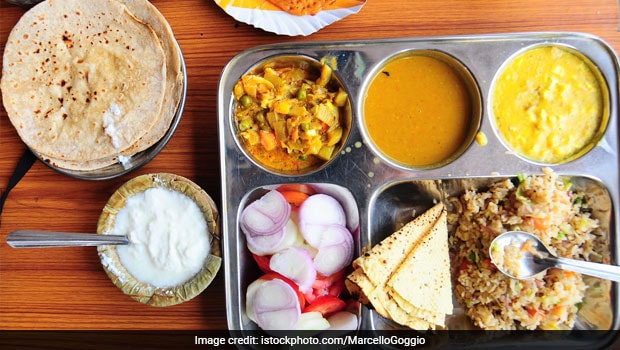 This Indian thali made by an American chef won the internet.

There's something inherently comforting about Indian food and the dishes that it encompasses. A complete traditional Indian thali can tantalise your tastebuds and leave you wanting more. However, making multiple dishes included in the thali at home can be quite a daunting task. An American chef who is also an Indian food enthusiast took on this task and painstakingly created an entire Indian thali from scratch at home. The user posted the picture of the same on Reddit and desi foodies on the platform were mightily impressed. Take a look:

I'm a westerner who has worked hard learning your amazing food and culture. Today I presented my first thali. Jai Hindi from r/india

The thali comprised several delicious dishes, including smoked lamb Andhra curry, grilled Butter Chicken with brown buttermilk crumbs, Dal Makhani, goat milk Raita, lime Pickle, Chapati and sourdough Naan. For the sweet part of the thali, there was the humble Gulab Jamun. The user put his own spin on the plating by using edible flowers to garnish the dishes rather than coriander leaves.

This delightful Thali was created from scratch by the Reddit user, who goes by the username @theancientofdayz. "I'm a professional chef, author and restaurant owner. Not an Indian chef though," he wrote introducing himself in the thread. His interest in Indian food stemmed from the learning he obtained by working with an Indian chef, which left him wanting to explore more. "I've worked under and Indian chef for two years and I'm so passionate about learning more. Being an American with no background in this cuisine was hard to begin to understand it," the user explained on Reddit. He also revealed his future plans, "I'm learning to speak Hindi, and thinking about traveling to India to try and work with some chefs next year."

(Also Read: 13 Grand Indian Thalis You Need to Try At Least Once In Your Life)

Users adored the wonderful preparation which clearly had a lot of hard work put into it. One user wrote, "I am born in India and I cannot prepare even one dish from that thali, let alone the entire thali. Please take a bow sir!" "This thali alone places you at top 5% or even 1% of r/india's culinarian skills," another user commented.

What did you think of the delicious Indian thali? Tell us in the comments below!