Chefs fight for the right to serve their pork pink 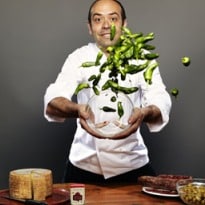 Foodies have waded into the battle being waged against rare meat by championing the delights of "pink pork", which environmental health officers warn can contain a virus that causes potentially fatal liver failure.

The Chartered Institute for Environmental Health, which represents food inspectors, highlights a recent report for the Department for Environment, Food and Rural Affairs which revealed that the number of human hepatitis E cases increased by 39% between 2011 and 2012. The report claimed that there was "increasing evidence" the rise was down to "food borne zoonoses" and referred to a study that found 10% of pork sausages on sale in the UK contained the virus.

"There is a general issue about cooking at low temperatures," said Jenny Morris, the institute's principal policy officer. "Food safety is ensured by the combination of the right time and temperature to kill the pathogens. Some research suggests that, to eliminate the risk of hepatitis E, food at its core needs to reach 70C for 20 minutes. If pork is served pink, it's unlikely to have reached that temperature at the centre."

But critics insist that pink pork tastes better and is not a health risk, providing certain guidelines are followed. Over the summer a pop-up restaurant run by the Ginger Pig company, the upmarket chain of butchers in London, served more than 2,000 people a ribeye cut of pork shoulder taken off the bone and served pink without incident. Nicola Swift, Ginger Pig's creative food director, said she would never recommend eating pork as rare as steak, but believed that "a little pinkness in larger roasting joints can make a world of difference to the succulence of the meat".

Swift said there was a noticeable trend for restaurants to serve their pork on the pink side. She pointed to the increasing number of Spanish-influenced restaurants, such as the José tapas bar and its sister restaurant Pizarro, both in Bermondsey, London, which have won rapturous reviews for serving a speciality, Ibérico pork, presented extremely rare.

José Pizarro, whose restaurant was voted best last year at both the Food and Travel Magazine Awards and the World Food Awards, said that when he first started out working in restaurants in London 14 years ago his employers thought he was mad for serving rare pork. "The trick on serving rare pork is the supplier," Pizarro said. "The Ibérico pork I serve at Pizarro and José is of seriously high quality and out of all my suppliers that one is the relationship I probably nurture the most. These pigs are reared on acorns and are thoroughly spoilt. The resulting meat is tender, soft, tasty. It is so different to that sort of leathery, chewy finish you can often get on a pork chop. It is my signature dish and my customers absolutely love it."

Concerns about undercooked pork stretch back to the foot and mouth crisis of 2001 which was triggered by pigs being fed on scraps containing animal products, including that from their own species. Feeding pigs on scraps was banned in the UK as a result of the crisis.

But Morris said the reputation of the supplier was still no guarantee that the meat was not carrying hepatitis E. An investigation by the Animal Health and Veterinary Laboratories Agency found hepatitis E in 49% of pigs in Scotland. The virus usually causes a mild illness but in some cases it can lead to acute liver failure, which can prove fatal, particularly for pregnant women.

The trend for pork to be be served pink intensified in 2011 when the US Department of Agriculture lowered the recommended minimum cooking temperature of pork by 15 degrees Fahrenheit.

Slow cooking meat "sous-vide", in vacuum packs in a water bath at a low temperature, has also been a factor in the increasing popularity of pork tenderloin and shoulder to be served pinkish.

"Sous vide can allow pathogens to survive if food safety rules are not followed carefully," Morris warned. "It requires good knowledge and skills to carry out the process safely."

Chefs and food critics complain that inspectors have been over-zealous in applying the rules governing the cooking of meat. But Morris defended the right of food inspectors to intervene in the debate.

"Chefs have good craft skills, but are not food safety experts," Morris said. "Where there is evidence of real risk then inspectors are justified in telling chefs about the boundaries of safety."

Photo: José Pizarro says that he only sources the highest quality Iberico pork. Photograph: Mark Harrison for the Observer