'Cut Off' The Old Year With Japanese Soba Noodles 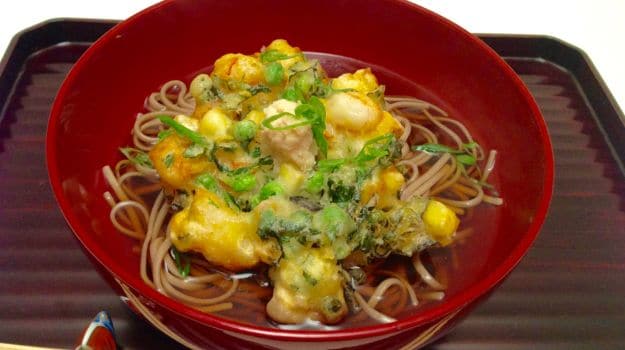 After moving to the United States, I was fascinated and eventually hooked by the way Americans welcome the new year. There were New Year's Eve parties peppered with all kinds of excitement: sexy dresses, endless champagne, playful party props, dancing, counting down the seconds and kissing whomever is near while listening to "Auld Lang Syne." None of these elements -- except counting down the seconds -- exist in our Japanese tradition. I was brought up in a culture in which welcoming the new year is a spiritually refreshing traditional event, packed with ancient superstitions and customs, that extends from the end of the old year into the first three days of the new.

In Japan, New Year's Eve is as important as Christmas Day in Western countries. It is a solemn moment for us to reflect on ourselves, looking back at the past year. What kinds of sins and mistakes did we commit? Did we do anything especially good? By identifying these elements, we try not to carry bad luck into the new year. We also try to complete unfinished tasks. The new year must be a fresh start, without unwanted baggage from the old year. During this period in the Shinto religion, we observe a change in the god of the year. At the end of the year, we express thanks to the departing god for protection during the past year. On the first of January, we welcome a new god and ask for his favor in the new year.Nearly all the Japanese population eats soba (buckwheat noodles) on New Year's Eve. This is one of the superstitions involving new year culinary traditions. When you visit Japan at this time of the year you see signs at restaurants and food stores, many of them written on handmade washi paper with bold ink brush strokes, notifying customers that they will offer Toshikoshi soba, the buckwheat noodles especially eaten on Dec. 31. Toshikoshi soba itself is really nothing special as a dish. It is actually the same soba noodles consumed during the rest of the year.

If you want to test this superstition or at least participate in a delicious tradition, here is one important reminder: You need soba noodles made from 100 percent buckwheat flour. Japanese and Asian stores in America, and even some American ones, carry soba noodles, but many of them are made from a combination of buckwheat and other flours. These noodles won't break so easily, so they won't separate you from last year's bad luck!

Tempura is a perfect accompaniment to soba. My mother prepared a feast at the end of every year, but simple soba noodles with shrimp tempura were the highlight of the meal. The live shrimp were sent to us by one of my father's patients as a thank-you gift on Dec. 31 for as long for as I can remember. After eating the tempura and soba, all of us were certain of a very healthy, good year.

After the meal, close to midnight, we would head to the nearby Buddhist temple, where the priests performed a special service welcoming the new year for the community. A large bonfire, created for the warmth and for burning old talismans and any unwanted documents from the past, brightened up dark, cold environment. As we watch the fire and listened to the temple bell tolling 108 times, our past sins and errors were dispelled so we could to welcome the fresh start for the new year. People quietly greeted each other with "Omedeto gozaimasu" (Happy New Year), and the voices and people soon disappeared into the dark in every direction. Each headed to enjoy brief sleep before the next morning's pilgrimage to a Shinto shrine to make the new year offering and prayers. This was followed by the huge New Year's Day festive feast, Osechi-ryori, a meal packed with additional symbolic and good fortune food items.

If you want to enjoy an important part of our tradition, here is the recipe for Toshikoshi soba. As I mentioned, make sure to secure 100 percent buckwheat noodles for this special occasion. The tempura accompaniment here is called kakiage tempura. Chopped shrimp and vegetables are deep-fried in the form of a delicious pancake.

Dozo Yoi Otoshio! (Please have a good end of the year!)

1. Heat 3 inches of the canola oil in a heavy skillet to 350 F. Place a slotted spoon in the oil and allow it to heat to the temperature of the oil to prevent the batter from sticking to it.

2. Bring a large pot of water to a boil over medium heat. In a bowl, toss the green peas, eggplant, kale and shrimp with 2 tablespoons of the tempura flour. In another bowl, mix the remaining tempura flour with the cold water. Stir with a fork until smooth. Add the tempura batter to the shrimp mixture and mix with a large spoon.

3. Using the large spoon, scoop 1/4 of the shrimp mixture from the bowl and pour it into the slotted spoon that was warming in the oil. Immediately lower the slotted spoon into the heated oil and submerge the shrimp mixture. Leaving the spoon in place, cook the mixture (kakiage) for 1 1/2 minutes or until the bottom side is cooked. Using a steel spatula, remove the kakiage from the slotted spoon and let it float free in the oil. Cook the kakiage for about 4 minutes, or until lightly golden, turning it a few times during cooking. Transfer the cooked kakiage to a wire rack set over a baking sheet and let drain. Repeat the process for the remaining batter.

5. Prepare a kettle of boiling water. Pour the boiling water over the cooked noodles to re-warm them. Drain the noodles and divide them into bowls. Bring the noodle broth to a simmer in a medium pot over medium heat. Pour the hot broth into the bowls. Divide the kakiage tempura among the bowls. Garnish with the ginger and scallions and serve.