Demand for Packaged Food Rises as Vegetable, Fruits Get Expensive 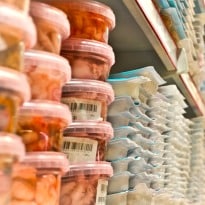 Over 58 percent of people in the middle and low income groups have switched to packaged food items like tomato puree, ketchup and fruit juices owing to the rise in the prices of fresh fruits and vegetables, said a survey released here Saturday.

"Rising prices of fruits and vegetables" was conducted by the Associated Chambers of Commerce and Industry of India (Assocham) and it interviewed over 5,000 people from the middle and lower income groups in cities like Delhi, Mumbai, Hyderabad and Dehradun.

"Over 58 percent have switched over to precooked and ready-to-eat food items like tomato puree and packaged juice to keep the kitchen budget intact as the fear of a bad monsoon has hiked the vegetables and fruits prices by 300 percent," said the survey.

As per the survey, in the last three years, "the average salary of the respondents had gone up by 10-15 percent while the prices of vegetables have risen by 250-300 percent".

As a result, over 88 percent of the people surveyed found it tough to manage their household budgets.

D.S. Rawat, secretary general of Assocham, said that almost all vegetables and fruits in the market have become costly due to the early onset of monsoon rains.

"The prices of most of the widely consumed vegetables have shot up during the last two weeks with the early onset of monsoon rains.. Prices of brinjal, onion, cucumber and tomato besides fruits have sky rocketed," he said.

Listen to the latest songs, only on JioSaavn.com
The survey noted that fruits have "also become a luxury" for the lower middle class and they are now preferring to buy a litre of fruit juice than a kilo of fresh fruits. Similarly, the demand for tomato puree and ketchup has risen."The main categories of packaged food are canned/dried processed food, frozen processed food, meal replacement products and condiments."

CommentsOver 50 percent agreed that the expenditure on fresh fruits and vegetables, Rs. 5,000 per month, has gone up by four times to what is used to be five years ago.