Despite Worries Over Violence, Beer Flows at World Cup Stadiums 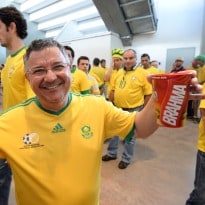 It has been a common sight at World Cup games: huge lines of fans buying beer inside stadiums before returning home with stacks of empty souvenir cups in their hands. A top FIFA official expressed concern at the amount of drinking during the month-long tournament, though it was football's world governing body that forced Brazil to change its laws to allow beer sales at stadiums.

Despite the concerns, beer is expected to continue to flow unimpeded during the two semi-final games, Brazil-Germany and Argentina-Netherlands on Wednesday. Brazil outlawed alcohol at games in 2003 to curb fan violence, but it had to pass a special law authorizing booze at the World Cup as part of its agreement to host it. In the corridors of the 12 World Cup arenas, fans lined up to buy US-made Budweiser or the local Brahma brand, both owned by Belgian-Brazilian giant Anheuser-Busch InBev, a major tournament sponsor.

Many fans have streamed out of stadiums with handfuls of the 473-milliliter (16-fluid ounce) commemorative cups in their hands. They paid 13 reals ($6) for a Budweiser, or 10 reals ($4.50) for a Brahma, and the cups have become hot items for sale online. But AFP reporters saw some heated arguments, including a brawl, during two games at Rio de Janeiro's Maracana Stadium involving fans who had apparently consumed alcohol.

At the Uruguay-Colombia last-16 game on June 28, several Brazilian fans traded blows with Uruguayans in the stadium's corridor. The fight began after an apparently inebriated Brazilian man shouted at the face of a Uruguayan woman to mock her team's defeat, which made her drop her beer, prompting a countryman to come to her defense.After the France-Germany quarter-final last Friday, security guards had to get between two men wearing jerseys of rival Sao Paulo football clubs in the corridor of the Maracana. The man in the Corinthians shirt, holding around eight empty cups in one hand, shouted "come here" at the other one, but guards were able to keep them separated. During the game, several security guards took positions between fans screaming at each other.

Some Brazilians were glad they could drink during World Cup games but they backed the prohibition during domestic league games, saying local fans can get violent. "People don't know how to drink with moderation," said Carlos Franca, a 48-year-old Brazilian with a yellow and green top hat who had a couple of beers during France-Germany.

Diogo Albuquerque, a 33-year-old engineer bedecked in Brazil team colors, said the difference with domestic matches is that "there's a lot of security" at World Cup games. A Brazilian couple who attended Argentina-Belgium in Brasilia said they saw several drunk people at the game. "It's much better to see a game with a beer at the stadium, but it can lead to fights. It has its positive and negative side," said Jaroslav Duchicry Junior, 30.

FIFA secretary general Jerome Valcke said last week he was "struck and worried by the level of drunkeness of many supporters who do not behave well." He warned consumption controls could be imposed, but no such measures appear to have been ordered.

A spokeswoman for AB InBev in Brazil, Daiana Rodriguez, told AFP that beer would continue to be sold normally because FIFA has not required controls. "This (control) would depend on FIFA," she said. The brewer "will continue selling beer until the last game." FIFA did not respond to emailed questions. Another AB InBev spokeswoman said the company provided "responsible server training" for stadium staff. The company could not provide World Cup sales figures.

The cups, meanwhile, have become hot collector items for sale online. The red Brahma cups had the names of teams, their flags and the date of the game during the group phase. Only the name of stadiums and date appeared in the quarter-finals.

Listen to the latest songs, only on JioSaavn.com
On a Brazilian personal advertisement website, one person asks for as much as 50 reals ($22) for one red Brahma cup from a last-16 game. Another asks 30 reals ($13) for a golden Budweiser cup that has an image of the cup's trophy. Rafael Dottore, a 33-year-old management consultant, came out of France-Germany with three empty cups as keepsakes.

While the beer costs more than what Brazilians would normally pay for a pint, he said "they would pay in a World Cup stadium. It's a souvenir."