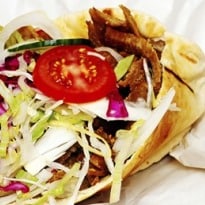 The person widely credited with inventing the ubiquitous post-pub snack has died. But the truth behind the doner kebab's origin isn't quite that simple

Kadir Nurman died this week in Berlin at the age of 80, leaving in his wake the kind of legacy many of us can only dream of. For Nurman was the inventor of that king of midnight feasts, the doner kebab. Or so they say.

The doner - or shawarma or gyros, as it's also known -differs from other familiar kebab by preparations, such as shish, by being layered up on a spit and grilled vertically. This in itself wasn't particularly novel; 18th-century Ottoman travel books talk of meat being cooked this way, while in the kebab's spiritual home of Bursa, the vertically grilled Iskender is perhaps Turkey's finest mouthful.

Nurman's supposed innovation came in sticking the shaved pieces of meat into a flatbread with the saladings, making kebabs a moveable feast for busy Berliners. Until then, in theory, they had been shoved on a plate. While few seem convinced by Nurman's claim to have invented what is essentially a sandwich, in 2011 a slightly mysterious Berlin-based organisation called the Association of Turkish Doner Manufacturers made it official, and so it passed into history.

"I'm quite puzzled by all of this," says Lebanese food writer Anissa Helou. "The sandwich has been around for ever in the Middle East, so I'm not quite sure how anyone can claim to have invented it. I think it's some kind of marketing ploy." Nurman certainly isn't the first Berliner to be credited with the creation of the kebab. Today's headlines might have been pasted from one five years ago which hailed Mahmut Aygun as the doner's inventor.

Here in the UK, where we do love a kebab, the first doner is said to have been sold in 1966, predating Nurman's "invention" by six years. And a splendid way to celebrate winning the World Cup it must have been, too.

We have not always done right by Herr Numan, though. Sadly, British doners have become irrevocably linked with the worst of our weekend excesses. The typical high-street kebab in the UK is to a real doner what a pot noodle is to pho. "You have to be drunk to eat one of those," chuckles Helou. Done well, however, a doner is a fine thing, neither as unhealthy nor as inelegant as we tend to think - decent, supple, warm bread instead of cardboard pitta; chunky, tender meat instead of greyish, anonymous mince; a handful of fresh, perky salad and a squirt or two of sauce, it is as good a dinner as you can ask for.

"A good doner is made from a lamb's shoulder and breast (non-processed) and seasoned handsomely," says Ferhat Dirik, co-owner of Mangal 2 in east London. "It's best served as a wrap, with warm pitta or lavas bread. Be careful not to drown the meat by including every vegetable available at your local "Best Star Kebab Best Greatest Best Kebab". Instead, opt for onions, white cabbage and lettuce. Eat it like a caveperson. Tell no one."

While there are plenty of kebab shops in the UK producing doners every bit as good as Dirik's, there could always be more. The British Kebab awards launched this year, and with them, one hopes, the impetus for a higher quality kebab. With fewer elephant legs, better bread, and crisp salads, perhaps Kadir Nurman will be laid to rest without too often having to turn, doner-like, in his grave.

Photo: Do you want chips with that? A doner kebab Photograph: Rob Lawson/Getty Images