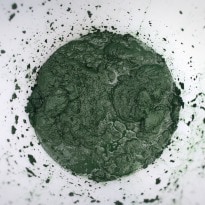 On a hotel rooftop in Bangkok, dozens of barrels of green liquid bubble under the sun -- the latest innovation in urban farming.

Proponents of the edible algae known as spirulina say it could help provide a sustainable source of protein as an alternative to meat.

Three times a week, Patsakorn Thaveeuchukorn harvests the green algae in the barrels.

"The algae is growing so fast, normally the doubling time is around 24 hours," said Patsakorn, whose employer EnerGaia uses Bangkok's rooftops to grow spirulina.

With its high levels of protein and nutrients, "it is beneficial to food security," he told AFP.

"If you compare it to meat it will take six months to grow a kilogram of beef, but this we can grow in a week," said Patsakorn.

Spirulina has been described by health food experts as a super-food, and it is becoming more popular worldwide.

Rosa Rolle from the UN's food and agriculture organisation (FAO) says it has been an important food source for centuries.

"It grows naturally in Lake Texcoco in Mexico. It was eaten by the Incas," she told AFP. "It's in many countries that border Lake Chad in West Africa and is a protein source for a lot of people."

However she warns that it can lead to health problems for people suffering from gout, as it produces a lot of uric acid, and says people need to be educated about spirulina's positive and negative effects before they consume it.

"You need some nutritional information, but for people without medical conditions it would be fine," she said.The empty space on top of Bangkok's many skyscrapers provide suitable growing conditions for spirulina as the constant high temperatures and sunlight are ideal breeding conditions.

The algae also helps combat carbon dioxide levels through photosynthesis, its champions say, and growing it in cities means it can reach consumers the same day it is harvested.

Once the spirulina algae has been collected, it is hand rinsed and spun dry in a modified washing machine.

It then has to be hand pressed into jars, as there is no machine yet available that can work with the thick, jelly like substance it produces.

"There has been a lot of trial and error," Derek Blitz, technology director at EnerGaia, told AFP.

"It is great for vegetarians and vegans. It's also packed with anti-oxidants. It is really good for cleansing your body."

Picture/AFP: A spirulina farm on the top of a hotel in Bangkok
In their laboratory, lines of different sized test tubes all connected to one another act as the breeding ground for the algae. On the rooftop, barrels of different shapes are in testing, to see which will produce the highest yield.

The company says it is the only producer of fresh spirulina in the world; other companies only sell dried and processed varieties.

Jars of the algae have a shelf life of around three weeks from harvest, though Blitz plans to increase that so it can be exported abroad.

"The advantages of having it fresh are that it has virtually no taste, so you can mix it with anything," he told AFP.

"Eating dried spirulina is like eating a cooked vegetable as opposed to a raw one, so you are getting a little bit more nutrition out of it (when fresh). The other reason to eat fresh produce is because there's a lot less energy involved in producing it."

And chefs across Bangkok are starting to experiment with the algae. Bill Marinelli, the owner of the Oyster Bar, is a convert.

"It is really good for you," he told AFP, in between mouthfuls of green pasta made with the algae. "We add it to dishes to increase the nutritional value."

The colour of the algae is so strong that anything it is mixed with instantly turns green. But despite that, and the fact it has no flavour, Bill is still keen to use it in his dishes.

"I'm looking at it as an alternative to animal protein. We can cut back on the amount of protein we serve as fish or meat, and incorporate spirulina for the additional protein source," he said.

CommentsSpirulina has been used as a food supplement for decades, and is popular among body builders. The question now is whether consumers will see it as a possible alternative to meat and fish.