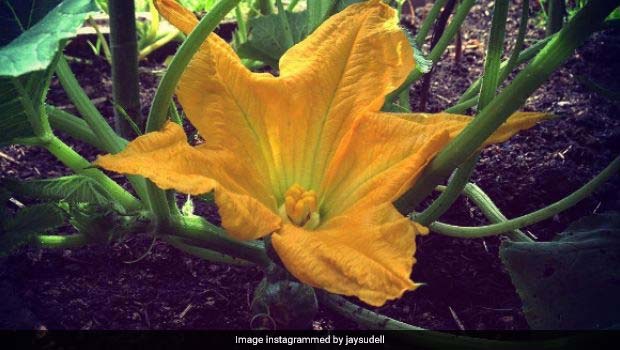 Highlights
Nature's bounty is not unknown, but thanks to culinary masters across the globe who take regional ingredients and transform them into spectacular treats to delight our tastebuds. One such ingredient is pumpkin flower. Pumpkin is a part of a squash plant, which has dainty and edible flowers attached to it. These flowers have an orange and yellow hue and many may not know that they are edible and make some of the most popular dishes in West Bengal and Kerala. Curious much? We list down some of the popular delicacies made with pumpkin flowers in India and across the world that are not only appealing to the eye but also to the palates. Take a look!

Mathapoo (pumpkin flower) Thoran is a stir fry popularly savoured in Kerala and makes an ethnic delicacy there. Generally, these plants are grown at homes and plucked fresh to make this dish. It cooks into a dry vegetable which is served hot with rice. Other ingredients added to it include mustard seeds, red chillies, grated coconut, turmeric powder, curry leaves and cumin seeds among others.

Kumro Phooler is a Bengali word that means pumpkin flower and Bora means fritters or pakoda. It is one of the most popular and traditional fritters among Bengalis. It makes a crispy and yummy snack which served with chutney or sauce. It is made like any other pakoda, dipped in gram flour batter.

This delicacy is believed to be American, and is known as Classic Stuffed Peppers. Pumpkinf flowers have a very subtle flavour and can be great with fillings. The flower is filled with a mix of beaten and whisked eggs and breadcrumbs and closed. Then the flower itself is dipped in a mix of egg, breadcrumbs and baked for about 10 minutes till they turn crispy and brownish in colour.

Pumpkin flowers are abundant in Mexico, where they are known as Flores De Calabaza. Quesadilla is a popular snack in Mexico and this dish makes for a great snack. Their delicate flavour works beautifully with mild, creamy cheese in these quesadillas that are surely going to leave you asking for more.

Mostly eaten in Ireland, Crunchy Fried Pumpkin Flower is fritter like dish smeared in batter of flour, beer and olive oil and deep fried. These crunchy delights are enjoyed over drinks. To make the flower edible enough, the stigma of the petals is removed.

Otherwise, pumpkin flowers are used in various delicacies as condiment, soup ingredient and others. You can eat them in salads and use them as dressings in cold salads or other delicacies.