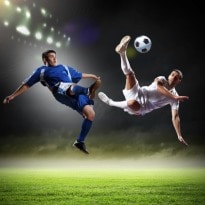 With the ongoing FIFA World Cup 2014, the football frenzy seems to have gripped one and all. This is the second time that Brazil will play host to the national teams from 31 countries and it has been reported to be the most expensive World Cup tournament ever! With lavish arrangements, come huge expectations. Enter, the stars of the pitch and their eye rolling food demands -

Ecuador
They have requested for Ecuadorian bananas to be placed in every room. Ecuador is the fifth largest producer of bananas in the world and it seems that their National team is the biggest fan of their local produce. The hotel owners have been asked to ensure that a basket of fresh bananas shall be placed every day for each player, the variety of which may change but they must be from Ecuador.

Australia
The Aussies want to eat their way to health. They have requested for a special Brazilian meal of red meat, fish and chicken, all cooked in the healthiest manner. They probably 'kick'-start their day with a cuppa coffee and have therefore asked for coffee machines for each player.

France
The French battalion has requested the hotel to change their menu to include only halal meat as most of their players are Muslim and refrain from consuming meat from animals that have suffered during slaughtering. They have reserved all the rooms in the JP Hotel in Ribeirão Preto, São Paulo.

England
Unlike the 82-page catering propaganda that the English cricket team served Australia during the Ashes 2013-14 (Test cricket series between England and Australia), their football team has been least demanding. They've only asked the hotel to set aside one of their three restaurants exclusively for the team's use.Bosnia
This was perhaps the strangest of all - the Bosnian team has asked for a sound proof screen to be installed so that they players could dine on one side and the coaching staff on the other. Now that's some confidential chatter we'd love to eavesdrop!

CommentsUnited States
The team will be staying at the luxurious Tivoli São Paulo Mofarrej hotel and have asked for a daily dessert of fresh fruit and honey cake with meals from the two Michelin-starred Chef Sergi Arola. Interestingly, the swimming pool of the hotel is orange in colour unlike the usual blue, which creates a strange optical illusion of swimming in orange colored water!