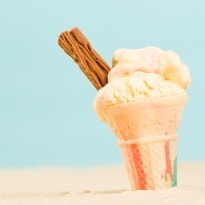 Whether it's learning to make bacon ice cream, sampling lamb from the Kalmyk steppes, or rustling up paella a la russe, Muscovites have embraced all things foodie in a gastronomic revolution.

Hard to find just a few years ago as Russia remained burdened by the Soviet Union's gastronomic legacy, medium-priced restaurants that use locally sourced, seasonal ingredients have now become the hot new trend.

Magazines aimed at the upwardly mobile publish cooking columns, and the middle-classes are discovering the joys of the dinner party.

The monthly Afisha Food magazine has spearheaded the trend, and last weekend it packed crowds into a central Moscow park for a food festival that was the first of its kind in Russia.

Young couples with children in pushchairs and groups of friends happily queued for two hours to buy pork cooked sous-vide (sealed in a vacuum) and charcoal smoked, or chicken ragout with cherries and coriander.

"There has been an evolution in the way the middle classes see food. After 70 years in a gastronomic ghetto, we all tried out exotic dishes. And now we are looking for a happy medium," said Alexei Zimin, the editor of Afisha Food, a food columnist for Kommersant daily and the co-owner of Ragout restaurant."Cooking has become a big topic in the media. A huge amount of information has appeared on the subject," he told AFP.

CommentsOn stage, in front of several hundred spectators, he reveals some tricks of the trade: for example, prawns with rosemary need to be sauted three times to ensure they are cooked through and juicy.