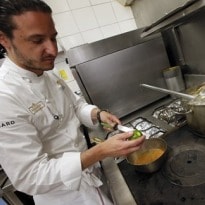 Restaurant-goers in France will start seeing a funny little symbol on their menus this week: a skillet with a house on top, indicating your menu choice is made in-house. It's part of a new law meant to battle against the surprising amount of factory-made, pre-packaged food in French restaurants, and celebrate the country's culinary traditions.

However, many in the industry say the law doesn't go far enough, because it allows dishes made from frozen, pre-peeled or pre-cut products to count as home-made. France's chief of consumer affairs, Carole Delga, told The Associated Press that the logo would better inform customers about what they're getting, and highlight restaurants' craftsmanship.

"It's about sending a message that France is a country where we eat well, where we have skills, especially cooking skills," she said. "We wanted to give concrete tools for tourists and for French people, and recognize cooking as an integral part of our French identity."

While UNESCO put French cuisine on its World Heritage List in 2010, two recessions in recent years have driven more and more French chefs to resort to pre-packaged food to cut costs. And France is a champion of industrial food, with companies specialized in frozen foods or dishes that can be prepared quickly and look homemade.

Alain Dutournier, cook and spokesman for the Culinary College of France, a non-profit supporting French gastronomy, is among those who think the law makes it too easy for restaurants to claim a dish is home-made. "It's really not very serious. I thought it would be more rigorous and precise," he said. "Once again they are choosing to serve the interest of the food-processing industry."
This logo, in two black and white versions, provided by the French Trade Ministry shows the new symbol indicating your menu choice is made in-house.

Listen to the latest songs, only on JioSaavn.com
Diners at Crom'Exquis, a restaurant in Paris' 8th arrondissement, gave the new law mixed reviews. Anne-Laure Bernard called it "a great tool."

There is an exception for potatoes. Dubbed by French media the "McDonald's exception," it means that no one making French fries out of pre-peeled potatoes can claim to be "home-made."

CommentsParliament approved the law March 17, and it came into effect this week. Restaurants and catering companies have until Jan. 1 to adapt their menus.