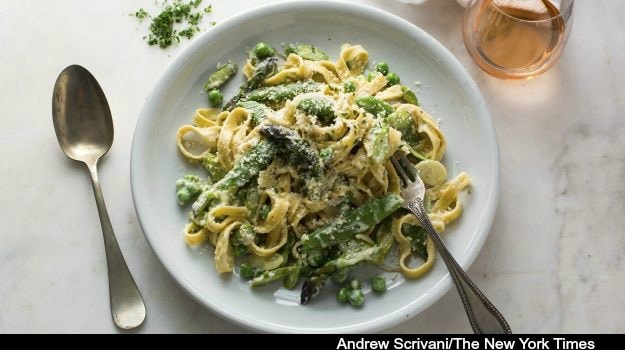 The myth that you need to be an Italian grandmother to make great pasta was so ingrained in Anna Klinger that when she went to Italy as a young cook to study the craft, she assumed it would take years to master.

"I thought that making pasta was this daunting, messy undertaking that would leave you and your kitchen covered in flour and egg from top to bottom," said Klinger, who is now the chef and a co-owner of Al Di La, Bar Corvo and Lincoln Station in Brooklyn.

The biggest surprise when she got to Italy was that making pasta from scratch is so simple and straightforward that there's barely any learning curve.

"Once you make it a couple of times, you've got it," she said.

And contrary to some other pasta myths out there, you don't need to buy any special equipment or clear your schedule for an entire day to make it, either.

Even tonight, you can throw together a bowl of pappardelle for your family or a friend with nothing more than your hands, a rolling pin and some basic ingredients that you probably already have (eggs, flour, salt and maybe olive oil). And it will take you less than an hour of active time to do so.

The payoff is tremendous. Fresh pasta has a beautifully silky yet springy texture and a rich, almost buttery egg-yolk flavor that is far better than anything you can buy - even the first time you make it.

My first attempt at pappardelle, though slightly lumpy and a little frayed at the edges, still boiled up into a gorgeous and satisfying pot of noodles. Subsequent batches got silkier and finer in texture and were easier and quicker to mix together. But the difference in taste between that first, tentative try and my most recent is small.

The most difficult part about making pasta is having the confidence not to follow the recipe.

The basic pasta rule of thumb is to use one egg for every 100 grams of flour. But the exact proportions of ingredients will vary depending upon the humidity in the room, the age of the flour and the time of year, so you need to pay attention to the dough and let your instincts guide you.

In her encyclopedic cookbook, "Essentials of Classic Italian Cooking," the ever-precise Marcella Hazan - whose pasta dough recipe takes six pages to get through - called for mixing the ingredients in a mound directly on the tabletop to maintain the greatest control.

"Because no one can tell in advance exactly how much flour one needs," she wrote, "the sensible method of combining eggs and flour is by hand, which permits you to adjust the proportions of flour as you go along."

For example, Klinger explained: "In the winter, when your skin is dry, you know your pasta will be dry, too, so you'll need to use a bit less flour. In the hot and sticky summer, you might need a little more flour to make it all come together."

Some cooks add water, olive oil and salt to the flour and egg. The Philadelphia chef Marc Vetri, whose new book, "Mastering Pasta," goes deep into the art and science of pasta-making, said that playing with these different components allows you to fine-tune the pasta according to your own taste.

"You can just mix up some eggs and flour, and you're going to make a really nice noodle," he said. "But once you start to understand how the egg works, how the flour works, when to add oil, you can manipulate the textures and flavors. That's when it starts to get really fun."

For example, although you can actually make pasta from nothing more than flour and water, the egg adds flavor, protein and fat, which makes the dough easier to work and enriches the taste. Pasta dough made with all yolks is the richest, but it can also be very soft. The water and protein in the egg white make the dough easier to work with, and also give pasta a bit more chew.

Olive oil adds fat and flavor, and makes the dough more supple and easier to roll out. A little bit of added water can help correct the texture of the dough, making a dry dough softer, though if you add too much, you risk mushy noodles that are prone to sticking to one another. And the salt adds flavor and helps to strengthen the gluten in the flour, contributing structure and elasticity.

In terms of flour, the "00" flour used in Italy for pasta is milled until it's baby-powder fine, making for an especially delicate noodle. But all-purpose flour works nearly as well, and the differences in the pasta, once covered in grated Parmigiano and some butter, is barely noticeable.

Bread flour will give you a slightly coarser pasta. But because its higher protein content increases the elasticity of the dough, it is sometimes nice to use when you want a springier, thicker noodle to stand up to, say, a spicy arrabbiata sauce.

Klinger and her chef de cuisine, Felipe Rodriguez, mix the dough for all of the half-dozen or so varieties of pasta on the Al Di La menu (including sweet pea tortelli, ricotta lemon ravioli and pappardelle with ramp greens and duck ragu) in a big bowl with one hand. But you could use an electric mixer instead, as Vetri does at his restaurants to keep up with the volume demanded by more than 100 seats, versus Klinger's 65.

I prefer using a food processor fitted with the metal blade, which is the fastest of the lot, though you do need to keep a close watch on the dough to make sure you get the right consistency. The dough should come together when you press it in your hand - evenly moist but not wet or sticky.

Once kneaded into a ball, it should be smooth as satin, according to Hazan - moist and elastic.

Jenn Louis, the chef and a co-owner of the restaurants Lincoln and Sunshine Tavern in Portland, Oregon, and the author of the new book "Pasta by Hand," said that at that point it is crucial to let the dough sit for at least 30 minutes.

"Letting the dough rest hydrates the flour, which then gets even more hydrated when you roll it out, and those water molecules get pushed into every nook and cranny," she explained.

This makes the dough easier to roll out into a gossamer sheet and then cut into shapes, like pappardelle, fettuccine, linguine, ravioli.

And as for the rolling, a rolling pin works well, though it does take some muscle to make the dough thin enough. Use a large, lightly floured work surface (a kitchen table is perfect) and don't be afraid to throw your weight onto it, unlike what you would do with a flaky pie pastry.

But even the exacting Hazan gives her blessing to using a pasta machine to thin out the dough, and it is much easier, at least for the novice. Vetri recommends an electric rather than a hand-cranked one because it leaves both your hands free for feeding the dough in between the rollers. Or enlist a friend to crank while you feed the dough through, or vice versa.

Then boil up your yellow noodles and serve them to that friend. They won't need much beyond a little grated cheese, olive oil or butter, and flaky sea salt. But they will be the most luxurious meal for all who partake.

1. In a food processor, pulse together flour and salt. Add eggs, yolks and oil and run the machine until the dough holds together. If dough looks dry, add another teaspoon olive oil. If dough looks wet, add a little flour until dough is tacky and elastic.

2. Dump dough onto a work surface and knead briefly until very smooth. Wrap in plastic and rest at room temperature for one hour or in the fridge overnight. (If pressed for time, the dough can be used after a 30-minute rest; just note that it would be slightly harder to roll out.)

3. Cut the dough into four pieces, keeping them covered with plastic wrap or a dish towel when not in use. (If you're rolling out the dough by hand, rather than using a pasta machine, cut it into two pieces instead.) Using a pasta roller set to the thickest (widest) setting, roll one piece of dough out into a sheet. Fold the sheet in thirds like a letter and pass it through the machine two more times on the same setting.

4. Reduce the setting, and repeat rolling and folding the dough, passing it through the machine two or three times before going to the next setting. For pappardelle and fettuccine, stop rolling when the dough is about one or two settings wider than the thinnest one on your roller. For lasagna noodles, and for ravioli and other stuffed or filled pasta, go to the thinnest setting. (To roll dough by hand, see note below.)

5. Shape the pasta. For pappardelle, cut rolled pasta into 1-inch-wide strips. For fettuccine, run the rolled sheets through the fettuccine setting on your roller. Place cut pasta on a flour-dusted sheet tray and cover with a dish towel while rolling and cutting the remaining dough. Make sure to sprinkle flour over the cut pasta before you place another layer on top. If not using immediately, cover the sheet pan with a dish towel to keep the dough supple.

6. Bring a large pot of well-salted water to a boil, add fresh pasta and boil for 1 to 3 minutes, depending on thickness of the pasta. Drain well.

Notes: To roll out the dough by hand, use a rolling pin to roll each of the two dough pieces out on a lightly floured surface. This takes patience but is not hard. Roll until it is as thin as you like, as thin as a penny for fettuccine and pappardelle, thinner for lasagna and stuffed pasta.

You can also dry the pasta for future use, rather than cooking it right away. You can let it hang in strands over the backs of your kitchen chairs or on a washing line if you have one. Or you can curl handfuls of pasta into loose nests and let them dry out on the sheet trays, uncovered.

Pasta Primavera With Asparagus and Peas

1. Bring a large pot of heavily salted water to a boil over medium-high heat.

2. While the water is coming to a boil, slice snap peas and asparagus stems into 1/4-inch-thick pieces; leave asparagus tips whole.

3. Melt butter in a large skillet over medium-high heat. Add snap peas, asparagus, English peas and onion. Cook until vegetables are barely tender (but not too soft or mushy), 3 to 4 minutes. Stir in garlic and cook 1 minute more. Season with salt and pepper; set aside.

4. Drop pasta into boiling water and cook until al dente (1 to 3 minutes for fresh pasta, more for dried pasta). Drain well and transfer pasta to a large bowl. Immediately toss pasta with vegetables, Parmigiano-Reggiano, creme fraiche and herbs. Season generously with salt and pepper, if needed.