How pistachios can become a new form of energy 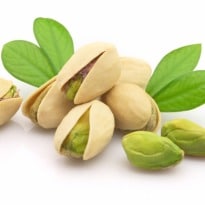 Pistachios are already a key ingredient in Turkish baklava, but the country may now have found a new way to exploit the nuts known as "green gold" - by using their shells to heat a new eco-city. Officials are currently examining plans to build the country's first ecological city with buildings both private and public heated by burning pistachio shells.

And there can be few better locations for such a project than Gaziantep -  the south-eastern region close to the Syrian border which produces thousands of tonnes of the nut every year. "Gaziantep's potential in pistachio production is known, as well as its considerable amount of pistachio shells waste," said Seda Muftuoglu Gulec, a green building expert for the municipality.

"We are planning to obtain biogas, a kind of renewable energy, from burning pistachio shells," Gulec told AFP. "We thought the ecological city could be heated by burning pistachio shells because when you plan such environment-friendly systems, you take a look at natural resources you have," she said. "If the region was abundant in wind power, we would utilise wind energy."

The pistachio-heated new city would encompass 3,200 hectares, and house 200,000 people. It would be located 11 kilometres (6 miles) from the province's capital city, also named Gaziantep. "Imagine it just like a separate city," Gulec said.

If the project bears fruit, pistachio shells formerly regarded as waste could become a new form of energy. Turkey is one of the world's biggest producers of pistachios, along with Iran, the United States and Syria, according to the UN's Food and Agriculture Organisation. Last year, it exported 6,800 tonnes of the nut, generating approximately $80 million (57 million euros) in income, up from 4,010 tonnes and $50 million in 2010, according to the Southeast Anatolia Exporters Union.

Promoted
Listen to the latest songs, only on JioSaavn.com
Gaziantep alone exported 4,000 tonnes last year, Mehmet Kahraman, from the union said. A pilot project for the new city will run in a small 55-hectare area, before rolling out across the entire city if successful. The potential of pistachio shells was first uncovered by French environmental engineering company Burgeap which reported last year that the local variety known as Antep was the most feasible source of energy in the region.

Burgeap said as much as 60 percent of the area's heating could be met from renewable energy resources. The project is still pending approval from local authorities.

CommentsWhile Gulec declined to provide a firm timeline, she said that if officials at the municipal level reach an agreement -- and if private land owners are convinced -- it will be implemented in a "very short period of time".