How to Cook the Perfect Crumpets 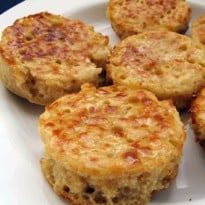 It's a delicate business but worth the trouble - just make sure you have enough butter to do them justice at the end.

Anyone puzzled by the origins of the appreciative term "nice bit of crumpet" has clearly never had a good one. Well toasted, and decently adorned, these fluffy yeasted tea cakes are - and I don't use this phrase lightly - properly, hopelessly sexy. Indeed, a fellow food writer recently told me her husband wooed her with homemade crumpets.

It's possible to buy decent ready-made versions but as Elizabeth David observes in her English Bread and Yeast Cookery, crumpets are infinitely better "freshly cooked, warm and soaked in plenty of butter" - indeed the true connoisseur will continue to spread until it seeps from the bottom.

The problem that exercises many wannabe crumpet cooks is the small matter of the holes that separate the crumpet from the yeasted pancake. They're surprisingly elusive; I dismiss two recipes, one from Hugh Fearnley-Whittingstall and one in a book allegedly devoted to crumpets and teacakes, because of the sad smoothness of the accompanying pictures. The pride and delight you'll thus quite rightly feel when those first tremulous bubbles emerge through the batter will only add to the joy of the whole affair.

Elizabeth David quotes Walter Banfield's 1937 book Manna: A Comprehensive Treatise on Bread Manufacture as claiming that "providing suitable flour is used, these honeycombey, labyrinthine structures are fairly simple to make". According to Banfield, that is a 50:50 mixture of strong and plain flour, a mixture also favoured by blogger Pete Favelle, who adapts a recipe from a little 1980s book of Favourite Home Baking Recipes.

Although they have a fair few holes, I find Rhodes's crumpets in particular have a rather soft and doughy interior that I put down to the plain flour, which presumably lacks the gluten to form a robust internal structure. David and Favelle's are both much better, with definite honeycombing inside, but they still have a slightly fondanty texture missing in Smith and Parle's rather more robust efforts.

This may well be deliberate; David complains she finds toasted crumpets "tough", which suggests she prefers a softer, more yielding inside. I find the stronger honeycombing makes for a lighter crumpet, and better butter absorption. To that end, I favour strong flour, with a measure of plain to stop them from being too chewy.

The other thing that affects the structure of the finished crumpets, of course, is the raising agent used. Yeast seems to be obligatory - Rhodes and Smith use nothing else. Parle adds baking powder, and David stirs in bicarbonate of soda before cooking, which she reckons is the secret to achieving those holes. I'm inclined to agree: Parle's crumpets rise bravely, but have something of the muffin about them, and Rhodes and Smith's are only haphazardly peppered with holes.

The bicarbonate of soda seems to yield the most consistent bubbly batter - in order to guarantee those holes, I'll be upping the dose slightly (but cautiously; bicarb has a distinctive, and not entirely welcome, flavour).

Thrifty Rhodes mixes his dough with water, while Smith uses milk. The others mix milk and water - David slightly more water than milk, and Parle 1:5 ratio of water to milk. I think the main difference comes down to flavour - Rhodes' crumpets are noticeably blander than the rest - rather than texture, as I'd expected.

Generally milk softens as well as sweetens, but Smith's crumpets aren't squidgier than the others. I do think water helps the top and bottom to crisp during cooking, however, so, like Parle and David, I'll be using a mix, this time weighted towards milk.

Rhodes' is the only recipe that doesn't use sugar to get the yeast going - and although his crumpets aren't noticeably flatter than the others, they have less flavour. A good seasoning of salt and sugar is wise here.

There doesn't seem much sense in being overly prescriptive about the proving time here: Smith suggests 45 minutes in a warm place, David up to two hours at room temperature - more important is to leave the mixture until it's a mass of frothy bubbles. Allowing a second rise once you've added the bicarb, as David suggests, seems to give marginally better results in terms of bubbles.

Almost everyone underestimates the cooking time as far as I'm concerned - as Favelle says, after five minutes the first "crumpetness" should start to appear around the edges, but flipping at this point, as Parle suggests, would be madness. Better to do as Rhodes counsels, and cook over a low heat until "small holes appear and the top has started to dry", then wait a bit longer. Don't overfill the rings either: a thick crumpet won't cook through.

Greasing the crumpet rings (or any food rings will do) is essential - butter tastes best - but to be honest, they'll still be a devil to wash up. Just think of it as a tax on treats.

It's a delicate business, cooking crumpets, but the results are very well worth it, I promise. Just make sure you've got enough butter in to do them justice.

Mix the sugar, milk and boiling water in a jug and stir in the yeast. Leave in a warm place for 15 minutes until frothy.

Combine the flours in a large mixing bowl with the salt. Stir in the liquid and mix vigorously until smooth. Cover and leave in a warm place for between one-and-a-half and two hours until the batter is a mass of tiny bubbles.

Mix the bicarbonate of soda with 50ml warm water and stir it into the batter. Cover and leave in a warm place for 30 minutes.

Melt the butter and use it to brush the inside of four crumpet rings. Heat a large frying pan on a medium-low heat and grease the pan. Put the rings flat into the pan and ladle a spoonful of batter into each, so they are about half full.

Cook until the top is dry and festooned with holes, then push the crumpets out of the rings (you may need a knife for this operation). If eating immediately, toast the tops under a hot grill until golden, then serve. If you're keeping them, cool on a wire rack, then toast on both sides to reheat.

Crumpets - better than sliced bread, or a strange, stodgy remnant of a time before cupcakes and macarons? Does anyone sell a decent version, and do you eat yours sweet or savoury? (Personally, I'm with too much butter and a scraping of Marmite.)