How to Make Lemongrass Tea 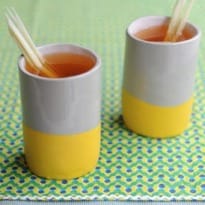 Lemongrass tea is a reminder that things are looking up - put the kettle on, says Henry Dimbleby.

With this miserable weather and all the talk of austerity and cuts, it may not feel like this is an amazing time to be alive. But it is. Global life expectancy hits new records every year. Scientists are on their way to conquering malaria and Aids. A whopping 96% of us have televisions. And now, the corner shop at the bottom of my street has started selling lemongrass.

This is a fact so startling that it deserves exploration. In 1979 my mother, Josceline Dimbleby, wrote a cookbook for Sainsbury's called Cooking With Herbs and Spices (there are 15 used copies left on Amazon if you are quick).

At the time, Sainsbury's only stocked cinnamon powder (for cakes), cayenne pepper (for devilling eggs, presumably), mixed dried herbs and a mysterious substance called mixed spice. Most Britons still regarded foreign food with suspicion, bordering on fear. My mother - a diplomat's daughter, who had spent much of her childhood hanging out in the embassy kitchens in Syria and Peru - was a woman ahead of her time.

She suggested in an early meeting about the book that there wasn't much point in them publishing it if they didn't have any of the ingredients she was going to mention: fresh parsley, cumin, coriander - that sort of thing.

She wanted to include recipes that now seem quite familiar, like her orange and cardamom ice-cream, and carrot and coriander soup. "They thought I was weird," says Mum. But they capitulated and the book sold tens of thousands of copies. Fresh parsley was here to stay.

Since then, culinary progress has galloped along at such a pace that last week, I was able to poach forced rhubarb in fresh orange juice, with a crushed stem of lemongrass, all sourced from the local Costcutter.

So I offer this recipe by way of celebration. Take a moment from your frenzied bill-paying. Infuse it slowly. Sip it while staring out of the window at this miserable non-spring and think: we've never had it so good.

Make your own lemongrass tea

1 Cut off the root end of the lemongrass stalk and remove any of the any dry outer leaves. Gently bruise the base of the stalk with a rolling pin.

2 Tie the lemongrass in a knot and place in a cup with cinnamon and sweeteners if using.

3 Pour in the boiling water. Add a tea bag and remove as soon as the water is golden brown.

4 Add lime juice to taste and serve with a lemongrass stirrer.

Lemongrass tea, a steaming reminder to be cheerful. Photograph: Jill Mead for the Guardian