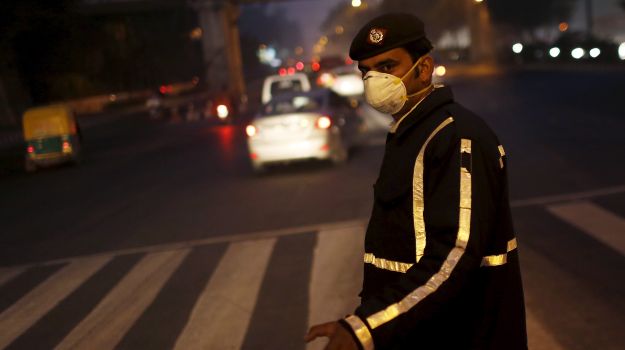 A traffic policeman wears a mask to protect himself from dust and air pollution as he signals to drivers in New Delhi, India, December 23, 2015. REUTERS/Adnan Abidi

India is devising a plan to combat smog in the capital New Delhi, the world's most polluted city, two senior officials said, but the government is stopping short of targeting the powerful transport industry.

Instead, the plan will call for enforcing bans on what some environmentalists regard as relatively minor sources of pollution, including burning of garbage and construction dust. The World Health Organisation said last year that 13 of the world's 20 most polluted cities were in India, with New Delhi the worst.

In the absence of concerted government action on battling pollution, courts have stepped in, banning the sale of luxury diesel vehicles and demanding a tax on trucks entering the city. The federal plan, which the two officials said would be made public within two weeks, will be one of the government's first attempts to come up with a broad solution to the problem.

Under the plan, they said, the government will enforce a ban on burning garbage and tyres in Delhi and its three surrounding states; require that construction sites are covered with curtains; and clean road dust. The measures are "by and large" reiterations of older rules that have rarely been enforced, the officials said.

Environmental activists said the moves were cosmetic. "It's a piecemeal approach," said B. Sengupta, a pollution campaigner and former government scientist, when he was told of the plan. "It will not drastically improve the air."

Experts said the city of 16 million needed a permanent ban on diesel cars, which are seen as polluting, and other measures to reduce spiralling vehicle emissions. Campaigners are calling for steps like a parking cess and an annual tax on all cars.

"Vehicular emission is a major contributor of overall toxic pollution and is a concern due to its direct exposure to the population," said Anumita Roychowdhury, executive director of the Centre for Science and Environment think-tank.

The government officials said there wasn't yet enough evidence to be sure about how much vehicular emissions contribute to pollution. New Delhi has however pledged to bring forward tighter emission norms for vehicles and the transport ministry has said it would ban commercial vehicles that are over 15 years old from the country's streets next year.

"If we just tackle vehicular pollution, you are not going to get the results you need," one official said. The automobile industry feels it is being singled out and that there is need for a holistic plan - including scrapping of old cars and a ban on burning of biomass and paddy fields - to improve air quality.

The government is commissioning more studies to understand the different pollution sources, the officials said. Crop burning and industrial pollution from adjoining states add to the bad air, complicating decisions for policymakers.

China, which faces a similar smog problem in Beijing and other cities, has twice issued "red alerts" for pollution in the capital, ordering all outdoor construction work to stop and urging schools to close. India will consider a similar alert system for Delhi, but first the city needs to expand its network of air monitoring stations, from 29 at present, the officials said.

On Wednesday, levels of PM 2.5, tiny particulate matter that reaches deep into the lungs, touched 500, a level deemed "hazardous" that leaves even healthy people at risk of serious respiratory problems, data from the U.S. Embassy's monitoring station in New Delhi showed.

New Delhi resident Aparna Dhawan said the new federal proposals were welcome, but effective implementation would be key. "They will not work unless the government enforces them properly and decides who will be held responsible," said the 43-year-old, who has bought an air quality monitor and a purifier for her home and masks for her family and domestic helpers.