Indian Version of 'Come Dine With Me' soon. 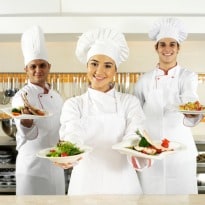 According to channel sources, popular TV celebrities like Sakshi Tanwar, Ram Kapoor, Aman Verma, Samir Kochhar, Manoj Tiwari and Shibani Dandekar have been approached to host the Indian version of the show. It will be aired on Life Ok.

The show will have four or five TV celebrities meeting for dinner each week at the home of the one member of the group, who will not only cook a three-course meal, but also engage with his or her guests.

After dinner, the guests will judge the host on food, entertainment and hosting skills. At the end of all dinner sessions, the contestant with most number of marks will win.

Promoted
Listen to the latest songs, only on JioSaavn.com
VJ and film actress Nauheed, who is one of the contestants on the show went on to divulge that she has just shot for one episode.

However, the title of the Indian version of cookery show is kept under wraps.