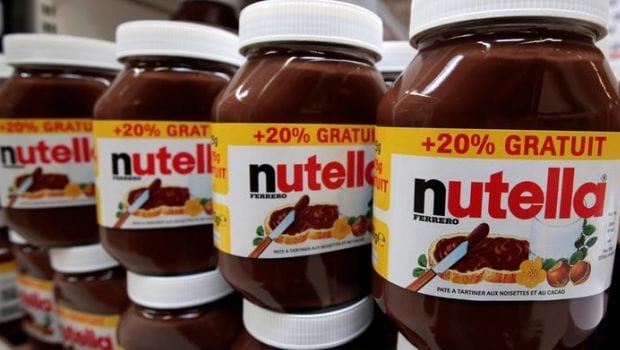 Jars of Nutella chocolate-hazelnut paste at a Carrefour hypermarket in Nice, France

Highlights
The $44 billion palm oil industry, under pressure in Europe after authorities listed the edible oil as a cancer risk, has found a vocal ally in the food sector: the maker of Nutella.

Italian confectionery firm Ferrero has taken a public stand in defence of an ingredient that some other food companies in the country are boycotting. It has launched an advertising campaign to assure the public about the safety of Nutella, its flagship product which makes up about a fifth of its sales.

The hazelnut and chocolate spread, one of Italy's best-known food brands and a popular breakfast treat for children, relies on palm oil for its smooth texture and shelf life. Other substitutes, such as sunflower oil, would change its character, according to Ferrero.

"Making Nutella without palm oil would produce an inferior substitute for the real product, it would be a step backward," Ferrero's purchasing manager Vincenzo Tapella told Reuters. He features in a TV commercial aired in Italy over the past three months that has drawn criticism from some politicians.

Any move away from palm oil would also have economic implications as it is the cheapest vegetable oil, costing around $800 a tonne, compared with $845 for sunflower oil and $920 for rapeseed oil, another possible substitute.

Ferrero uses about 185,000 tonnes of palm oil a year, so replacing it with those substitutes could cost the firm an extra $8-22 million annually, at those prices. The company declined to comment on these calculations.

The European Food Safety Authority (EFSA) said in May that palm oil generated more of a potentially carcinogenic contaminant than other vegetable oils when refined at temperatures above 200 degrees Celsius. It did not, however, recommend consumers stop eating it and said further study was needed to assess the level of risk.

The detailed research into the contaminant - known as GE - was commissioned by the European Commission in 2014 after an EFSA study the year before, into substances generated during industrial refining, identified it as being potentially harmful.

EFSA does not have the power to make regulations, though the issue is under review by the European Commission. The spokesman for Health and Food Safety, Enrico Brivio, said guidance would be issued by the end of this year. Measures could include regulations to limit the level of GE in food products, but there will not be a ban on the use of palm oil, he added.

The World Health Organization and the U.N. Food and Agriculture Organization flagged the same potential risk that EFSA had warned of regarding GE, but did not recommend consumers stop eating palm oil. The U.S. Food and Drug Administration also has not banned the use of palm oil in food.

The issue became a hot consumer topic in Italy after the largest supermarket chain, Coop, boycotted palm oil in all its own-brand products following the EFSA study, describing the move as a "precaution". Italy's biggest baker, Barilla, also eliminated it and put "palm oil-free" labels on its wares.

High temperatures are used to remove palm oil's natural red colour and neutralise its smell, but Ferrero says it uses an industrial process that combines a temperature of just below 200C and extremely low pressure to minimise contaminants.

The process takes longer and costs 20 percent more than high-temperature refining, Ferrero told Reuters. But it said this had allowed it to bring GE levels so low that scientific instruments find it hard to trace the chemical.

"The palm oil used by Ferrero is safe because it comes from freshly squeezed fruits and is processed at controlled temperatures," Tapella says in the TV ad, which was filmed at the firm's factory in the northern town of Alba and was accompanied by full-page ads in newspapers carrying the same message.

EFSA declined to comment on the possible risks of refining palm oil at lower temperatures.

Ferrero is by no means the only big European food firm to keep using palm oil in its products since the EFSA report. The likes of Unilever and Nestle use it in products including chocolate, snacks and margarine.

The two companies said they were monitoring the contaminant issue and were working with their suppliers to keep GE at lowest possible levels. Ferrero is the only big European food company to mount such a public defence of the use of the ingredient in its products following the EFSA opinion.

The company told Reuters it carried out "hundreds of thousands of tests" on contaminants in both the palm oil it uses and finished products.

Retail sales of Nutella in Italy fell by about 3 percent in the 12 months to the end of August, which Ferrero partly blamed on rivals promoting products as palm oil-free.

To address consumer concern the company launched its advertising campaign in September and says it is now showing results. Nutella sales in Italy rose 4 percent in the last four months of 2016, said Alessandro D'Este, the head of Ferrero's Italy business.

Global Nutella sales have been unaffected by the EFSA opinion and are growing at 5-6 percent annually, the company said. Family owned Ferrero, which is not publicly listed, did not disclose its sales for Europe outside its home market.

The group ended its fiscal year to August with total revenue of 10 billion euros ($10.5 billion), of which around 2 billion euros came from Nutella sales.

EFSA's 284-page study comes on top of environmental concerns that have dogged the palm oil industry for several years. Green groups have accused the industry of causing deforestation.

Several firms using the ingredient, including Ferrero, say they buy palm oil certified by the Roundtable on Sustainable Palm Oil, which works with producers to reduce the negative impacts of cultivation on the environment.

Tapella told Reuters that Nutella had contained palm oil since its creation in the 1960s and that the group relied only on palm plantations certified as sustainable.

The anti-establishment 5-Star Movement, which is running neck-and-neck with the ruling Democratic Party in opinion polls, has asked the Italian advertising authority to block Ferrero's campaign and fine it for misleading consumers on both health and environmental risks.

A spokeswoman for the advertising authority said it had yet to decide whether to reject the 5-Star complaint or take measures against Ferrero, adding that the process could take several more weeks. The palm oil industry, dominated by producers in Malaysia and Indonesia, believes Ferrero is playing an important role in addressing what it regards as misconceptions among consumers.

"It is good that Ferrero has clarified that the palm oil they use is safe and sustainable," said Yusof Basiron, chief executive of the Malaysian Palm Oil Council.

He said Malaysian producers had not suffered any impact on their European exports after the EFSA opinion. The Indonesian Palm Oil Association also said there had been no impact.