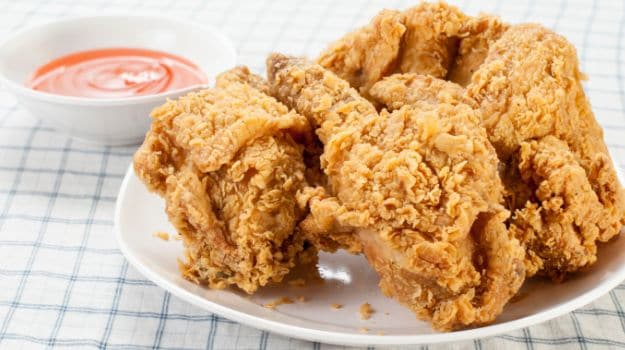 Yum Brands Inc's KFC unit in China said on Monday it has sued three companies it claims are using a popular messaging service to spread false rumours about the fried-chicken chain, including allegations that its chickens have six wings and eight legs.

The legal manoeuvre comes as KFC, which suffered two food safety scares within two years, fights to win back customers in China, which is Yum's top market for revenue and profit.

Yum said the rumours, which include digitally alerted photos of deformed chickens and rumours of maggots in a KFC delivery order, have been spread through 10 WeChat accounts operated by Yingchenanzhi Success and Culture Communication, Shanxi Weilukuang Technology Co and Taiyuan Zero Point Technology Co.

(KFC Invites Diners to Inspect Its Kitchen in China)

Reuters was not immediately able to reach those companies for comment. Yum did not specify when or where it filed the lawsuit.

"The rumours about KFC using chickens with six wings and eight legs have been around a long time," the chain said in a statement posted on KFC's China website. It added that it is impossible to create such a chicken and if KFC had, it could be in the running for a Nobel Prize.

(Coke, KFC - Sticking to Their Century-Old Secret Formula? Maybe Not)KFC said it identified 4,000 defamatory messages that were read more than 100,000 times by the end of April. It is demanding each company pay up to 1.5 million yuan (about $242,000), apologise and stop the alleged behaviour.

The messages were sent via WeChat, known in China as Wei Xin. It is owned by Hong Kong-traded Tencent Holdings Ltd <0700.HK>.

(KFC Faces Pressure After McDonald's Says No Antibiotics in Chicken)

Listen to the latest songs, only on JioSaavn.com
Yum's roughly 6,850 China restaurants, which include KFC and Pizza Hut, are fighting to recover from last summer's allegations of improper meat handling at OSI Group's Shanghai Husi Food Co Ltd, which was a small supplier to Yum but a key supplier to rival McDonald's Corp. Both companies immediately stopped using the supplier.

That news came shortly after Yum's China business had just begun recovering from the sales-battering punches of avian flu and a Chinese media expose about excessive antibiotic use by a few KFC suppliers.

CommentsFood safety is a big concern for Chinese consumers. One of the biggest scandals in recent years involved dairy products that were tainted with the industrial chemical melamine. Those products sickened thousands of people and led to the deaths of several infants in 2008.