KFC has a new campaign called 'KFC Napkinized' wherein all their paper collateral will be made with eco-friendly tissue paper reusable as napkins. 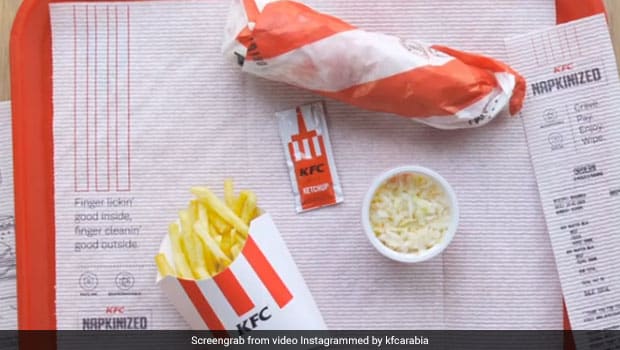 The pace at which food is being produced everyday has gone up by a massive scale thanks to growing demand and rapid industrialization. However, this speed may come at a cost for the environment. Fast food giants generate tonnes of waste which they find difficult to dispose-off. The waste comprises not just food waste, but in fact, paper waste too. Paper is used up in massive quantities to produce paper bags, paper napkins and even placemats for trays in which food is served. This paper has a single-time use and ends up in the dustbin soon after, leading to unnecessary waste generation that can easily be avoided.

KFC, aka Kentucky Fried Chicken, has come up with an interesting solution to this problem. The fast food giant realised that the need for paper-based items used in their chain couldn't be dismissed, and decided to convert all their paper collateral into reusable napkins. The campaign called 'KFC Napkinized' has been designed for KFC in the Middle East to make it easier for people to clean up after they eat. KFC's menus, receipts, food bags, posters, flyers and even place mats used at the restaurant will now be made with eco-friendly tissue paper that can double up as napkins.

KFC Napkinized has been developed by using a UV printer with a customised ink that is eco-friendly and biodegradable too. The initiative was planned by advertising agency TBWA/RAAD based in Dubai. Their innovative campaign has been widely recognized and acknowledged as a wonderful step in the contribution of restaurants towards environmental concerns. The campaign will be rolled out in 87 KFC restaurants across the UAE and Lebanon as well.

This is indeed an excellent example of a sustainable environmental practice that could be adopted by many more restaurants soon. We hope the Indian market too adopts a healthy practice like this in the near future!