KFC Invites Diners to Inspect Its Kitchen in China 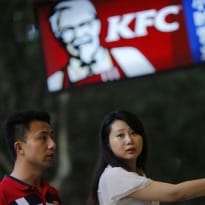 KFC has a message for Chinese diners worried about eating their fried chicken after a safety scare at the fast food chain: come see how we operate for yourself.

China is the biggest market by sales for KFC's parent Yum Brands Inc, but sales have slowed since July after a television report alleged that workers at a Yum supplier were adding expired meat to products. The scandal dragged in McDonald's Corp as well.

"How is KFC's food prepared? Is the chicken safe? Are the restaurants hygienic?" read adverts for the tours, printed on KFC placemats. "You can see our chicken farms yourself, and unravel the mysteries of KFC restaurants on the spot. You decide whether or not our food is safe!"

Customers can register online to book a visit. A tour led by the manager of a Shanghai restaurant this month showcased employee hand-washing (20 seconds), the oil used in the fryers (regularly tested and changed), the way the chickens are raised (safely) and the water used in the food (purified). Tour participants, however, were not allowed to use their mobile phones, take pictures or video or record any audio.

Yum Brands declined to say when the tours in China began, how many consumers had participated, or what impact they had. Xinhua, China's state news agency, reported that the tours began in July 2013, before the latest scare. "KFC has been doing kitchen tours for years in different markets around the globe as a way to educate consumers about our freshly prepared chicken," United States-based Yum spokeswoman Virginia Ferguson wrote in an email.

Facing slowing growth and a sceptical public, fast food companies around the world are lifting the veil on their production processes. In October, McDonald's launched a series of YouTube videos where United States TV host Grant Imahara interviews people in the company's supply chain.

Food safety is a particularly emotive issue in China, where scandals ranging from toxic baby milk formula to dirty food oil are common. That makes convincing Chinese customers to come back to a tainted brand tough, marketing experts say. "Because of the lives they have led - of tainted food, dumplings with cardboard in them, honey that isn't honey, liquor that isn't liquor - they distrust everything," said James McGregor, greater China chairman of public affairs group APCO Worldwide and author of the book "One Billion Customers".