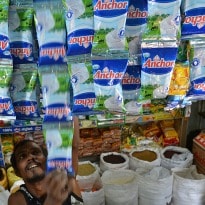 The company said Saturday it had completed a recall of two batches of milk powder under Sri Lankan government orders because of allegations it contained traces of chemical DCD.

Dicyandiamide, or DCD, is added to pastures to increase agricultural yields.

A New Zealand government website says DCD is not toxic and poses no food safety risk but adds that international regulators are likely to view DCD residues as a "contaminant".

However, Sri Lanka's health ministry said it considers DCD to be a "toxic chemical" that should not be in milk and that is why it ordered the recall, spokesman Dharma Wanninayake told AFP.

Fonterra, whose brands are the market leader in Sri Lanka, accounting for nearly two thirds of imports, has denied its products contain any trace of DCD.

"Our milk is 100 percent pure," Fonterra spokesman Roshan Kulasuriya said. "But we complied with the directive and have completed the recall of the two batches said to contain traces of DCD by today (Saturday)."

The Sri Lankan action is unrelated to the global safety recall announced by Fonterra earlier this month after tests turned up a type of bacteria that could cause botulism.

The ban will remain in force until August 21 when test reports from foreign laboratories are expected, a court official said.

Following the botulism scare earlier this month, Sri Lanka suspended the release of milk imported from New Zealand at a port in Colombo until an internationally recognised laboratory certifies they are toxin free.

Fonterra insists the batches at the port do not contain any harmful bacteria.

Promoted
Listen to the latest songs, only on JioSaavn.com
Sri Lanka imported $307 million-worth of milk and milk products in 2012 with the bulk coming from New Zealand and Australia, the central bank says.

The developments globally have been bad news for New Zealand's dairy industry which is a key driver of the nation's economy.

CommentsPicture/AFP: A Sri Lankan vendor sells New Zealand-made milk products in Colombo even as the government ordered a recall following the global alert for botulism in some dairy products manufactured by dairy giant Fonterra. Sri Lanka was following many other nations in ordering the recall after Fonterra said some exported whey products, including infant formula, may contain bacteria that could lead to the potentially fatal illness.