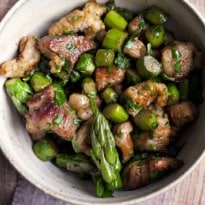 Shining butter sauces; soft saffron-hued egg yolks; crisp bacon and air-dried ham; toasted breadcrumbs and melting cheese. Any of these will make the asparagus on your plate more interesting. As will the rather quaint accompaniment of buttered bread. The flavours work, yes, but it's all about the marriage of fat and fresh green spears; crisp grains of toasted, grated Parmesan; the ooze of a melting Tunworth or brie. The rustle of freshly toasted breadcrumbs, translucent with butter or bacon fat.

The other night, I produced two plates of asparagus with a handful of shattered, crisp bacon and hollandaise sauce for barely a fiver. I added substance with a toasted muffin, lending a sort of eggs Benedict feel to the whole affair. It went down well, despite the butter sauce being left for 15 minutes before serving. (A bloody good whisking put a stop to the sauce's annoying habit of curdling.)

It is without doubt the butter, pork and bacon fat that made the asparagus so good to eat, but the flavour depends as much on the cooking time. I can't go along with the idea that the spears should always be cooked al dente. Crisp, bright-green asparagus just tastes exactly that - crisp and green. The real flavour of this vegetable is evident only when it is cooked longer than has become usual. That is why canned asparagus tastes so much of itself.

I only retrieve the spears from the water or steam when they have passed the vibrant green stage, when they have started to soften a little in colour. Timing depends on the thickness of the stalks, but it is generally a good five or six minutes at a rolling boil. If the spears will stand erect then they are not quite ready. Wait a minute longer and they'll taste more richly of what they are supposed to.

The best asparagus dish I have encountered recently was at a food stall in Fukuoka, where the spears came wrapped in very thin belly pork and were then grilled. (I thought it was streaky bacon until I tucked in.) The meat was sliced barely thicker than a sheet of paper and coiled around the asparagus like a ribbon up a maypole. It then sat on the grill, the fat from the pork basting the spears as they cooked, sending clouds of smoke heavenwards. I ate six at one sitting, which if you have seen the size of the asparagus in Japan you will know was a little excessive.

If you can't make a pot of egg and butter sauce, then a spoon or two of crème fraîche will do. I let it melt in a small pan then stir in some tarragon vinegar and a palmful of the chopped herb. Another possibility is to thin mayonnaise with a little milk or olive oil, or to dress the spears with (so friends tell me) a poached egg, placed on top of the spears, then broken, with a few drops of very good red-wine vinegar trickled over the running yolk.

It is important for the pork to have a good amount of fat. I use cubes cut from a piece of belly. After browning, the meat will need a good half-hour of cooking over a moderate heat.

Over a moderate heat, lightly brown the pork in a wide, high-sided pan, letting it cook in its own fat. If the meat is very lean use a couple of tablespoons of oil. Cover with a lid, slightly ajar to allow the steam to escape, and continue cooking, in its own fat, for 20 minutes or until it is starting to become tender.

Trim the asparagus, then chop into small pieces about 1 cm in length, and add to the pork with the butter. Continue cooking for 6-10 minutes, regularly spooning the butter over the pork and asparagus.

Remove and discard any tough stalks from the rocket leaves, then finely chop the leaves and stir them into the asparagus and pork.

The stock's depth of flavour depends almost entirely on the prawn shells and heads. You will need whole raw prawns for this, in their shells. Frozen are fine if the fresh ones evade you. The chilli is used in the piece, so you can remove it as soon as you feel the broth has enough heat. Taste as you go.

Peel the prawns and put the shells and heads into a deep saucepan, add a litre of water and bring to the boil, skim and discard any froth, then turn down to a gentle simmer for 25 minutes. Watch the liquid level, topping it up a little if you have to.

Trim the asparagus then, using a vegetable peeler, shave the spears down their length to give ribbon-like strips. Split the chilli in half lengthways, then scrape out and discard the seeds. Peel and shred the ginger into fine matchsticks.

Warm the oil in a wok or high-sided frying pan then add the finely sliced garlic and fry briefly. Add the chilli and the ginger and cook for a minute or two before adding the prawns. As they start to change from grey to pink, pour over the strained stock and bring to the boil.

Leave the soup to simmer for 8-10 minutes, then stir in the fish sauce. Divide the ribbons of asparagus between two or three bowls, remove and discard the chilli then ladle the hot soup and prawns into the bowls. Check the seasoning, adding a few sprigs of dill and a squeeze of lime.

Nigel Slater: 'The pork was sliced barely thicker than a sheet of paper and coiled around the asparagus like a ribbon up a maypole.' Pictured: his asparagus, pork and rocket recipe. Photograph: Jonathan Lovekin for the Observer