Switch to Healthy Cooking this Summer: Steamed Food is the Mantra 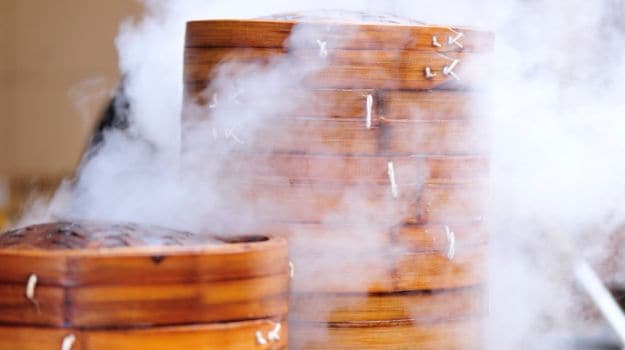 Steamed food is often misconstrued to mean bland food, but the two don’t necessarily have to walk hand in hand. The process of steaming is probably one of the oldest in culinary books and a simple one to master. It is all about correct timing, as a few minutes difference could either make or break your dish.

Steaming has been a common practice in Indian kitchens for centuries. If you travel along the eastern Himalayan belt, you’ll find plump steamed dumplings called momos, stuffed with meat and served with a spicy dip; in Kolkata, the bhapa bhetki or ilish is one of the most popular dishes wherein the fish fillet is smeared with a spicy mustard paste, wrapped in a banana leaf and steamed; in the south, no breakfast is complete without idlis or puttus; and in the west, the Maharashtrians patiently wait for Ganesh Chaturti celebrations every year to relish their beloved modaks (steamed, dome-shaped dumplings with a jaggery-based filling) whereas the Gujaratis are known for their gram flour-based steamed cakes called dhoklas.

Let Out the Steam

Steaming is considered to be one of the most effective techniques to preserve the texture, flavour and nutrition of the ingredients. When we pressure cook or boil food, most of the vitamins and minerals are lost in the water. But the process of steaming uses only moist heat to cook the food. All the ingredients cook in their own juices thereby retaining all their nutrients.

Hot or Not? How Serving Temperature Affects the way Food Tastes

Delicate ingredients like green veggies and fish need special care during the process of cooking and therefore steaming helps to retain their structure and texture. For example, try boiling a batch of French beans and steaming another one. You will notice that the steamed beans are perfectly crunchy and retain their colour as well. They tend to retain their texture and colour because the gentle steam diffuses slowly through the beans to create a uniform heating environment. Unlike other vigorous methods like boiling or frying, the steam does not agitate the cellular structure of the food tissues or their flavour components.

It is a common perception that steamed food is boring. On the contrary, it is a great way to diffuse flavours into the ingredients during the process of cooking. There are several ways you can turn up the flavour quotient in your steamed dishes.

In the pan of water that you use for steaming, throw in some spices like pepper, ginger, cardamom, coriander, etc. and you’ll find these flavours seeping into the steamed ingredient and lending to the final dish.

One of my favourite ways of steaming food is a technique called cooking en papillote or cooking in paper. Traditionally, in many parts of the country, you will find banana leaves being used as a parcel to wrap up the food which is then steamed. There are recipes that also make use of aluminium foil. I like to make a hearty fish dish by smearing whole pomfret or red snapper with a range of spices like chilli, mustard, garlic or basil pesto; wrapping it in foil and carefully sealing the edges; and then let the steam work its magic by blending all the flavours into the fresh fish.

For a quick and fuss-free dinner, take a good mix of veggies like broccoli, beans, mushrooms, baby corn, beets and carrots, toss them in a little oil and spices of your choices, and steam them for five to seven minutes to retain the crunch. Potatoes, squash and turnips require a longer time (15-20 minutes) whereas green leafy veggies like spinach, bok choy and kale only take three minutes. You could also pour over different sauces like sriracha, hoisin, honey mustard, fish sauce, etc. before serving for a flavour boost.

With the Indian summer in full swing, the smartest way to avoid the heat taking a toll on you is by eating light and healthy meals. This is probably the best time to invest in a steamer. You could choose between the easily available bamboo cases reminiscent of Chinese restaurants, the multi-tiered aluminium steamers and hot pots. For a quick fix, you could also simply place a perforated plate over a pan of boiling water and cover it with a lid.

Here are five easy and delicious recipes to get you started:

A healthy twist to dumplings, the flour-based casing is replaced with cabbage leaves, and stuffed with spiced minced chicken.

Steamed Tofu with Egg
Recipe by Aditya Bal and Devanshi

Fresh tofu cubes are marinated in a Chinese spice mix an carefully steamed to make this hearty treat.

Promoted
Listen to the latest songs, only on JioSaavn.com
Bhapaa Aloo
Recipe by Chef Joy Banerjee

Farm fresh potatoes smeared in a tantalising paste made of mustard, coconut and curd, and steamed. Comfort food at its best!