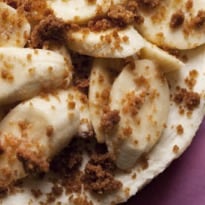 Quick and delicious desserts need only take half an hour - an effort guests, quite rightly, expect.

We had eaten a fresh and light chicken ragu, seasoned with spring onions and lemon thyme and served amid a tangle of fettucine; thick burgers of brick-red chorizo sausage and a salad of spiky lettuce. We had drunk a bottle of Ribeiro or two. Plates were cleared, coffee made and cigarettes lit. But there was a sense of something missing. A feeling of something unsaid. An elephant at the table.

Less polite friends might have said, "Where's the bloody pudding, Nige?" Truth told, I simply hadn't the time to do anything more than snap a bar of expensive chocolate into jagged shards and put it in the middle of the table. It wasn't a baked Alaska, a fruit tart, a cream-laden trifle or a steamed treacle sponge. It wasn't even a ball of vanilla ice cream or a plate of patisserie- bought, pastel-coloured macaroons. You could taste the disappointment in the air.

There has to be half an hour in the day to make your guests a pudding. To slice a box of honey mangoes and set them on a plate; to halve a few strawberries and top them with chopped pistachios or to make a sundae with ice cream, bananas, passion fruit and cream. You can make an apple tarte fine in half an hour if you use shop- bought pastry, But they expect more. A tray of cookies, a cake, a pie. And so they should.

Folding vanilla extract and molten white chocolate into mascarpone is child's play. Crushing sweet ginger biscuits into melted butter is a doddle. Ten-minute jobs at the most. Match them at the altar and you have a cheesecake. A tray of oat cookies made with butterscotch-scented muscovado sugar can be out of the oven in half an hour.

This is not the deliciously claggy cheesecake that is baked and left to set. Nor is it the deep and creamy variety that quivers as you take it to the table, but it is cheesecake nevertheless - one with a crisp and buttery base, a thick layer of vanilla-scented cream cheese and sweet, ripe-but-not-too-ripe bananas. If your fruit is too ripe, a generous dash of lemon juice will take the sickly sweetness away.

The biscuits I made are really useful. They will keep for a few days and when they go a little soft they are even better. Their texture is firm enough to use in an ice-cream sandwich, or maybe to bash and crumble over a sundae with bananas, chopped preserved ginger and lemon ice cream.

Without the bananas, this will keep in the fridge, covered with kitchen film, for a couple of days. However the crust will become firmer with time, so I like to eat it fairly soon after making. Add the bananas and crumbs shortly before serving. You will need a 20-22cm shallow, loose-bottomed sponge tin. Serves 8.

To finish:
bananas 3
juice of half a lemon

To make the crumb crust, melt the butter in a small saucepan and add the cream. Crush the biscuits in a food processor, then stir into the melted butter. When all the crumbs are moist, reserve about 3 tbsp of them then tip the rest into the cake tin, smooth them gently, but avoid compacting them. You want a loose, crumbly crust.

To make the filling, place a heatproof bowl over a saucepan of simmering water. Break the chocolate into small pieces and drop it into the bowl, leaving it, unstirred, to melt. As soon as the chocolate has melted, turn off the heat, pour in the cream and add a couple of drops of vanilla extract. Slowly stir the cream and chocolate together.

Tip the cream cheese into a bowl then fold the chocolate and cream mixture into the cream cheese. Scoop the filling on top of the crumb crust, smooth the surface level, then cover with kitchen film and refrigerate for at least 3 hours.

To finish, peel and slice the bananas, toss them in the lemon juice then pile them on top of the chilled cheesecake. Scatter over the reserved crumbs (if they have set, simply break them up a bit first).

If you eat these cookies within an hour of filling, they will remain crisp. But I prefer them the next day, when they become soft and chewy instead. Makes 8-12.

Set the oven at 180C/gas mark 4. Dice the butter and put it into the bowl of a food mixer. Add the muscovado sugar and beat till light and creamy, then mix in the egg yolk. Mix together the oats, flour, baking powder and salt.

Divide the mixture into 8-12 cookies depending on how large you want them to be. Roll into balls then flatten into roughly the diameter of a digestive biscuit and place on a baking sheet. They should be quite thick, so they remain chewy after baking.

Bake the cookies for 10-12 minutes, until they are lightly coloured but not yet crisp. Remove the tray from the oven, leave to cool for a minute or two, then transfer to a cooling rack. As they cool they will crisp up.

Make the filling. Put the mascarpone in a mixing bowl, stir in the lemon curd, then use to sandwich the cookies together.