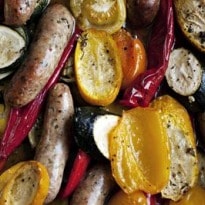 Slice two Romano peppers in half lengthways. Halve a red and a yellow pepper, remove the seeds and core, then cut each lengthways into four pieces and put them in a large roasting tin. Halve two courgettes lengthways, then cut each half into thick chunks. Halve six medium tomatoes, then add them to the courgettes and peppers in the roasting tin. Pour over six tablespoons of olive oil, season with salt and pepper (be generous) then add two tablespoons of chopped thyme and toss the vegetables in the oil. Tuck six plump and herby sausages among the veg. Bake for about 35-45 minutes at 180C/gas mark 4, turning occasionally until you have tender vegetables, golden sausages and lots of cooking liquid. Serve with chunks of bread to soak up the gloriously fruity juices. Serves 3.

It's all about the juices. Get hold of some great bread to accompany this. Sourdough possibly, or a light and airy ciabatta will do fine. The point here is not only the sizzling sausages and tender vegetables, but the sweet, thyme-scented cooking juices. Chunks of decent bread ensure that you won't waste a single drop.

I avoided putting garlic in this, but you could if the mood takes you. You could also cook it more slowly, on the hob instead of in the oven, letting the mixture sweeten and concentrate. Cool, chill and serve as a salad the following day. An aubergine or two wouldn't go amiss either.

Nigel Slater: 'It's all about the juices.' Pictured: his sausages with summer vegetables recipe. Photograph: Jonathan Lovekin for the Observer