No One Understands Baby Carrots 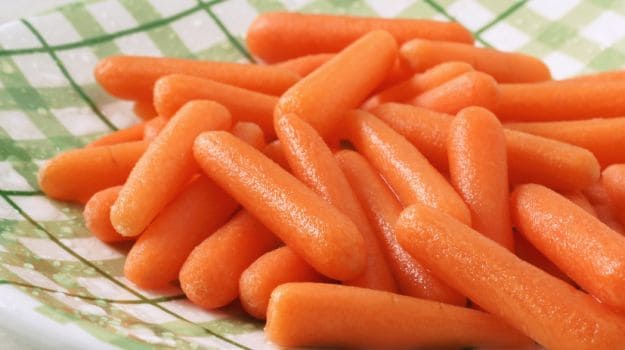 Ten years ago, NPR opened a radio news segment with a few words about a man few knew. Mike Yurosek, a carrot farmer from California, had passed away earlier that year. The homage was short-it lasted no more than 30 seconds-but for many of those listening, it must have been eye-opening.

"He actually invented these things," Stephen Miller, then an obituary writer with the New York Sun said, holding a bag of baby carrots. "Not many people know that baby carrots don't grow this way."

There are small carrots, which uppity restaurants serve as appetizers or alongside entrees, that sprout from the ground. But those look like miniature versions of the much larger vegetable. The smooth, snack-size tubes that have come to define carrot consumption in the United States are something different. They're milled, sculpted from the rough, soiled, mangled things we call carrots, and they serve as an example, though perhaps not a terribly grave one, of how disconnected we have all become from the production of our food.

"The majority of consumers have no clue what they're eating or how it's produced," said David Just, a professor of behavioral economics at Cornell who studies consumer food choices. "There are so many people who honestly believe there are baby carrot farmers out there who grow these baby carrots that pop out of the ground and are perfectly convenient and smooth."

It's hard to understate the ingenuity of the baby carrot, one of the simplest and yet most influential innovations in vegetable history. The little carrot sculptures (or baby cut carrots, as they're sometimes called to clarify) not only revived a once struggling carrot industry, but they also helped both curb waste on the farm and sell the Vitamin D-filled vegetables at the supermarkets.
The birth of the baby carrot

The baby carrot, like so many inventions before it, was birthed by necessity.

In the early 1980s, the carrot business was stagnant and wasteful. Growing seasons were long, and more than half of what farmers grew was ugly and unfit for grocery shelves. But in 1986, Yurosek, itching for a way to make use of all the misshapen carrots, tried something new. Instead of tossing them out, he carved them into something more palatable.

At first, Yurosek used a potato peeler, which didn't quite work because the process was too laborious. But then he bought an industrial green-bean cutter. The machine cut the carrots into uniform 2-inch pieces, the standard baby carrot size that still persists today.

When Mike Yurosek & Sons, Yurosek's now-defunct California company, delivered his next batch to Vons, a local grocery chain, he included a bag of the new creation. He suspected he was on to something, but hardly anticipated such an enthusiastic response.

"I said, 'I'm sending you some carrots to see what you think,'" Yurosek recounted in a 2004 interview with USA Today. "Next day they called and said, 'We only want those.'"

Vons wasn't the only one impressed. Grocers, distributors, carrot buyers, and, most importantly, some of Yurosek's most formidable competition took notice. In the years that followed, baby carrots ballooned into big business, nudging the biggest carrot producers in the country to join in and feed the frenzy.

"When we realized this wasn't a fad, this was real, everybody jumped on the bandwagon," Tim McCorkle, director of sales for Bolthouse Farms, one of the nation's leading carrot producers, recalled in a 1998 interview with the Chicago Sun Times. "This idea inverted the whole carrot-growing business."

It also helped lift the industry out of a rut. In 1987, the year after Yurosek's discovery, carrot consumption jumped by almost 30 percent, according to data from the USDA. By 1997, the average American was eating roughly 14 pounds of carrots per year, 117 percent more than a decade earlier. The baby carrot doubled carrot consumption.

A 2007 report by the USDA detailed many ways in which baby carrots have morphed the entire carrot landscape in the United States.

"The development and rapid consumer acceptance of packaged fresh-cut carrot products during the 1990s has helped the carrot industry evolve from a supplier of low-value bulk products to marketer of relatively upscale value added products . . . fresh-cut carrot products have been the fastest growing segment of the carrot industry since the early 1990s. Within the $1.3 billion fresh-cut vegetable category, carrots accounts for the largest share (about half) of supermarket sales, followed distantly by potatoes, celery, and others."


A too perfect snack

Of all the reasons for the rise of America's favorite carrot, there is likely nothing that has propelled baby carrots quite like their convenience. The quality was important to Americans in the 1980s, and it's even more precious now.

As people have found themselves with less time to sit down at restaurants or even cook at home, convenience has guided all sorts of decisions about food, especially when there is an option that requires little more than opening a packet.

"Baby carrots have transformed the way people think about carrots," said Just, the behavioral food economist. "The fact that you don't have to peel them, that it involves so little prep, is key."

"Baby carrots are also small enough to fit in your mouth," he added. "They're bit-sized and ready to be eaten. They're easy."

The fuzziness about the baby carrot's origins may have also helped their success.

Recent marketing efforts to further boost their popularity have positioned them as an alternative to junk food, rather than a different way to eat carrots. The packaging was changed to mirror that used for potato chips. "Eat 'Em Like Junk Food," the 2010 TV, print, and digital ads suggested, likening the vegetable vehicle to Doritos and other snack foods.

The campaign was a hit, boosting sales by 13 percent, succeeding, at least in part, by further disassociating baby carrots from their parent.

"This is a common theme now," said Just. "We are more and more disconnected from what we eat."

The truth is that it probably doesn't matter all too much whether someone understands that the smooth little 2-inch carrot cut-outs they're devouring didn't grow in the ground. Just maintains that knowing this probably wouldn't change anyone's consumption patterns, save perhaps for a small group of hardcore naturalists, since the processing involved is comparatively minimal.

Listen to the latest songs, only on JioSaavn.com
But that doesn't forgive the disconnect. Baby carrots, the ones that don't grow in the ground, have done more than simply boost the sales of carrot producers around the country-they have turned the carrot industry into a much more efficient and much less wasteful endeavor.

At a time when most ugly vegetables go to waste in the United States, ugly carrots are carved and sold at a premium. What's more, moving the peeling process to the factory has allowed the carrot industry to make use of the scraps that used to end up in people's trash bins.