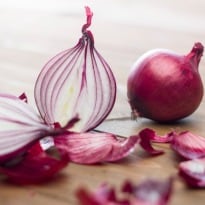 The prices of onions and vegetables, which have already sent the budgets of many homes in the national capital haywire, are expected to go sky high, vegetable vendors said here. The Delhi government plans to seek a ban on onion export.

The price of onions in the wholesale market Tuesday was Rs.50 a kg, but in retail stores it ranged between Rs.60-80 a kg.

"There has been poor harvest of onions this year due to rain shortage in Maharashtra. Prices of onions will continue to rise. There is inadequate stock to meet demands," Ram Dhan, a vegetable wholesaler in Azadpur Sabzi Mandi, told IANS.

Hoarding by traders is also being blamed for the rise in prices but traders denied any wrongdoing.

"There has been no hoarding by us. We are just creating stocks so that we can meet the demand and supply. If we do not create stock right now, there will be months when the onion supply would be nil," said Mahendra Khuranna, owner of Jagriti Agro, a fruit and vegetable wholesaler in Sabzi Mandi.

The spiralling prices of onion were deemed one of the factors which cost Bharatiya Janata Party (BJP) its government in Delhi in assembly election in 1998. Since then it has failed to return to power.

Women who manage households have been facing the greatest pinch as their budget has been greatly hit."I used to buy three kg of onion for a week, but now I have cut down to one kg because the price has almost tripled," said Arati Negi, a 32-year-old homemaker.

"The overall price of vegetables has increased. Earlier, one could buy four-five different vegetables for a household of two people for Rs.150. But now, with onions selling at Rs.60-80, the budget has doubled. Onions will make people cry for real and it may actually turn out to be a poll issue," said Pallavi Majumdar, professor at Amity University.

"I bought onions in bulk last week only for Rs.40. Though at that time I felt I should not have bought so much, now it is proving to be a blessing in disguise," said Namrata Kapoor, who lives in a joint family.

The Delhi government, which has already set up 350 onions vending stalls, has arranged 50 mobile vans to sell subsidised onions from Aug 17, said Yusuf.

The minister said the state government would also urge Maharashtra, Madhya Pradesh and Rajasthan - from where onions arrive in Delhi - to take action against hoarders.

The minister said the capital had a stock of 2,200 tonnes of onion and the people need not panic.

Development Minister Raj Kumar Chauhan, who looks after the functioning of wholesale vegetable and fruit markets in the city, told reporters that they would punish hoarders.

Listen to the latest songs, only on JioSaavn.com
The Delhi unit of BJP has announced a protest rally Wednesday from Ashoka Road in central Delhi to the chief minister's official residence at Motilal Nehru Marg, also in in central Delhi.