Ramsay Holds his Tongue While Working With Kid Chefs 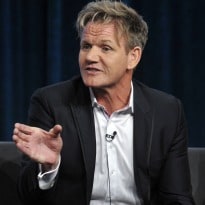 Gordon Ramsay's, dare we say it, softer side comes out when the formidable chef presides over aspiring kid cooks on a new reality show.

Kids between 8 and 13 who love to work in the kitchen will face off on "MasterChef Junior" debuting Sept. 27 on Fox.

Ramsay is the expletive-spewing restaurateur and star of such Fox shows as "Kitchen Nightmares" and "Hell's Kitchen." The new show is based on a popular British series.

"I don't think I swore once," Ramsay told the Television Critics Association on Thursday.

"Twice," corrected Gavin, a 10-year-old contestant from San Francisco, adding that Ramsay's cursing was directed at servers during a restaurant challenge, not the kids.

The contestants knew of Ramsay's fiery reputation as a demanding taskmaster, but 9-year-old Sarah from Pacific Palisades, California, said, "He can't be really mean because we're kids."

Ramsay, a father of three daughters and a son, told the budding chefs when their food wasn't good enough.

"I'm brutally honest and I think the kids appreciate that," Ramsay said. "Being firm and fair isn't anything we can be short on."

To soften the blow, they were sent home in pairs during eliminations."We hate saying goodbye," Ramsay said. "We let them down gently."

Tommy, an 11-year-old contestant from Palos Verdes Estates, California, said, "He was giving us tips on making it better."

Added Gavin, "He taught you not to give up and keep on trying."

Several of the seven kids at the TCA panel said they hope to pursue careers in food when they grow up. Ramsay said he enjoyed mentoring the kids and teaching them life-long skills about eating healthy foods.

"Learning to cook for yourself is so important to set them up for the rest of their lives," he said.

The first audition round features 24 kids split into three groups of eight to create seafood, pasta or desserts.

The top 12 finalists earn a white apron and advance to a series of challenges and cook-offs, including preparing Beef Wellington as a tag-team. The kids take over a fine dining restaurant in Los Angeles to prepare a three-course meal.