Chef Gordon Ramsay Posts Pic Of Butter Chicken From His Restaurant: Twitter Attempts To Roast Him In His Own Style! 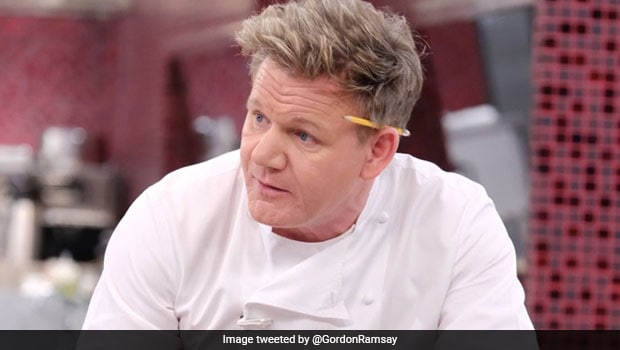 British chef and restaurateur, Gordon Ramsay is popular in the world for his signature style of kitchen insults, which are made up of the choicest expletives while he is critiquing food. The Chef's fiery temper and strict demeanour while judging cooking reality show contestants have spawned a whole world of internet memes and have made him a pop culture icon. On Twitter, amateur chefs post their 'best works' and ask for Chef Ramsay to roast them, and he never disappoints. But what happens when Twitter users find an opportunity to roast him for his own food? Something like that recently happened when Chef Gordon Ramsay posted a picture of a neatly plated bowl of butter chicken curry, South Indian poppadum and some rice.

A picture of the dish was posted by Chef Ramsay on his twitter handle with the caption, "Can't get on a flight from Heathrow without enjoying the butter chicken curry at @PlaneFood.... #readyfortakeoff @HeathrowAirport." Gordon Ramsay Plan Food is a restaurant owned by the Chef and that is located within Terminal 5 of Heathrow Airport in London. The dish failed to impress Twitterati, who proceeded to attempt a roast of Chef Ramsay, ironically in his own style.

Take a look at the tweet that started it all:

Can't get on a flight from Heathrow without enjoying the butter chicken curry at @PlaneFood.... #readyfortakeoff@HeathrowAirportpic.twitter.com/OVsLtluRkl

Butter chicken is an Indian chicken curry that is normally served with flat breads like naan, kulcha or paratha and sometimes with rice. A Twitter user replied to the picture by saying, "I watch your #KitchenNightmares and without a doubt if you was served that you would throw the 'green rubbish' off the plate." "That rice looks like I could throw it at a wall and it would bounce back," said another. Another user theorised: "Maybe Gordon has been hacked. Only way to explain." (sic)

Also Read: Gordon Ramsay Shocks Twitter With His 'Going To Give This Vegan Thing A Try'

Take a look at some of the replies:

Maybe Gordon has been hacked. Only way to explain

Promoted
Listen to the latest songs, only on JioSaavn.com
— Jeannine bryans (@JeannineBryans) February 18, 2019

What do you think about Chef Gordon Ramsay's take on butter chicken? Let us know in the comments section below!