Sous Vide: The Chefs' Secret Coming to Your Kitchen 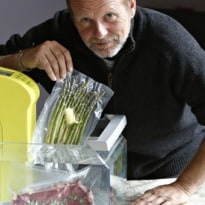 Chefs have been slow-cooking vacuum-packed food in water baths for years. Now technological advances mean the home cook can use 'sous vide' too. Just don't call it 'boil in the bag'

The history of food is littered with gadgets. Some could have taken off and didn't: a 1970s casualty was magnifying "diet goggles" that would reduce your weight by making the portion on your plate look bigger. Others did take off when they should not have: capsule coffee machines such as Nespresso, which are an insult to the planet and human intelligence, but backed by George Clooney.

But generally, the kitchen kit that succeeded did something genuinely new that could not be easily done another way. Food goggles failed, perhaps, because simply serving your food on smaller plates is just as effective a dieting tactic - and looks less silly.

Sous-vide cooking isn't silly and it is innovative - and now it is more realistically priced. Though something of a secret practice among professionals since it was invented nearly half a century ago, it has been called the most important technological advance in the kitchen since the microwave. The difference between zapping a ready meal with electromagnetic radiation and controlled temperature vacuum cooking - which is what "sous vide" is - is big. Sous vide makes food better to eat, not just simpler to cook, though it can do that too - it is impossible to overcook ingredients. Apart from convenience, the best advert for microwaves is the Pop-Tart.

The strict temperature control offered by water baths allows you to work with a precision that has been a holy grail for cooks ever since the first small-boy-powered revolving spit was introduced to the medieval kitchen.

Vacuum-sealing the ingredients prevents anything escaping. So your sous-vided broccoli comes with all its vitamins and trace elements still there, whereas boiling removes 60% of them or more - and it also stays a gorgeous rainforest green. A sous-vided steak is cooked just to the temperature that breaks down tendons and fat, around 55C (which happily is the temperature at which significant bacteria die, if you cook it for long enough). It will retain all its juices and its red colour, ready for a quick searing to give the outside a tan. Fish will firm up at less than 50C. Scrambled eggs need 75C, and have a deeper flavour than you've ever encountered.

Few professional chefs now do not use sous vide. But with a few exceptions, such as Jamie Oliver, they keep quiet about it. Gordon Ramsay was turned over on the front page of the Sun in 2009 for using "boil in the bag" meals in his gastropubs. This was unfair, but it is true that one of the things chefs love about sous vide is that it makes quality control much easier - you can get a complex dish to perfection, then vacuum-seal it, ready for gentle reheating.

Sous vide's history starts in Nasa labs in the 1960s, with sealed-bag meals prepared for astronauts; then it jumps to 1970s France, where nouvelle-cuisine chefs such as Albert Roux and Henri Gault loved the idea. They knew the old technique of cooking en papillote, in an oiled paper bag, to seal in flavour and juices; plastic was simpler. By the 1990s sous vide was being used, if secretly, in pro kitchens across the world.

Most great professional innovations in cooking transfer to the domestic kitchen pretty quickly. Sous vide has been slow because, of course, of the boil-in-the-bag taint, but also because of expense. It wasn't until 2010 that sous vide made its debut on MasterChef and the first water bath aimed at home cooks went on sale in Britain, and even then it cost £500. I got a SousVide Supreme and I still love it, though it is an elephant in the kitchen - grey and sweaty and taking up half the counter space.

As usual with gadgets on the cusp of mainstream take-up, manufacturers have pitched both high and low. Electrolux and AEG have both recently put sous-vide ovens on sale for the home market: they come with built-in vacuum-sealing devices and cook with temperature-controlled steam. But they cost about £3,000, more than most professional water baths.

At the other end of the market there is the clever PolyScience Discovery, which went on sale this year for £250 from sousvidetools.com. This simply bolts on to the side of a saucepan, and I've had more joy with it than with the bulky Supreme (it certainly annoys the other people in my kitchen less). It heats the water and circulates it, unlike the Supreme, and gets you closer to the point where choosing to sous-vide the veg is as simple an act as steaming it. The only annoyance is that to conserve energy you need to use clingfilm to cover the saucepan and the Discovery. With all these machines you also need a vacuum sealer and bags that will tolerate heat - I tried PolyScience's sealer (£98.99), but it is no better than the basic Lakeland seal-a-meal device at about £55.

So the kit is still costly. But there are low-tech workarounds. Chef Simon Rogan, of L'Enclume in Cumbria, started sous-vide cooking with an electric footbath designed for elderly care homes. You can do the same at home if you buy your meat vaccum packed - use a thermometer with a probe, a casserole covered with dishcloths and an induction electric plate (there are, inevitably, any number of other inventive hacks online, from rice cookers to deep-fat fryers and zip bags, and Tim Hayward put together a DIY guide for the Guardian's food blog, which you can find here). Sooner or later, sous vide will be in every self-respecting foodie's kitchen: the next food revolution will be vacuum-packed.