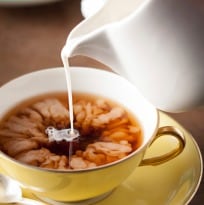 If you're someone who treasures your steaming hot cup of tea and uses it to unwind, relax and pace your thoughts, then you might be in for a real shocker!

On Monday, the Food and Agriculture team of Greenpeace India, a non-profit organisation that has been dealing with environmental issues since 2001 released a rather worrisome report that talks about the current situation of the tea industry in India.

Between June 2013 and May 2014, the team tested 49 different packaged teas from eight of the top 11 companies that not only dominate the branded tea market in India but also export to countries like Russia, Britain, the US, the UAE and Iran.

Here's a short summary of the report:

Neha Saigal, a senior campaigner for Greenpeace India said that, "Indian tea is a national pride and it should not be linked to toxic chemicals with serious environmental and health risks. All stakeholders in the tea industry should come forward and take steps to safeguard the reputation of our national drink."

The Tea Board of India was quick to respond and refuted these allegations stating that the tea being offered by the listed Indian brands is 'totally safe' and meet high standards. They also claimed that they would work to dispel any misconceptions about Indian tea in the eyes of the Indian consumer.

The Tea Board of India later said in a statement: "Having reviewed the findings of the Greenpeace study, we can confirm that all the samples tested comply with Indian laws and regulations that have been designed to protect consumers. Indian teas are well regarded world over, are totally safe and follow stringent standards."

They added, "The Indian tea industry led by the Tea Board of India has been constantly taking steps to make tea cultivation even more sustainable and reduce reliance on synthetic plant protection products to ensure that Indian tea continues to meet the high standards that consumers expect."

The steps include the launch of an initiative that will have certified at least 50 million kg of tea by December 2014 and the development of a "plant protection code" to aid best practice in tea cultivation.

The Tea Board of India concluded by saying that it was open to collaborating with all stakeholders to help make tea production more sustainable in the long run.

Comments
With Inputs from IANS