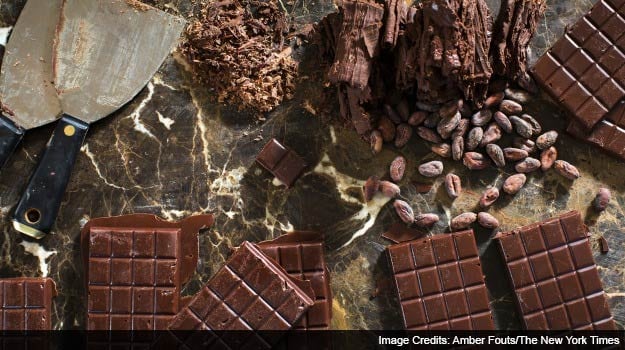 Obsessives are common in the world of cooking. They go down the rabbit hole of jury-rigged sous-vide machines, or spend two weeks lost in the 38-page bread recipe from the Tartine Bakery. They have cases of homemade lager in the hall closet and roast coffee in a wok.

And then there is the kitchen-counter chocolatier.

These are people like Louis and Kathy Cahill, an Atlanta couple who recently nursed a few pounds of cacao beans for three days and ended up with nine chocolate bars. They started by roasting raw cacao beans, which look like almonds that have had a really bad night. They cracked them and sprayed away the hulls with a blow dryer in their backyard. Then they sent the rough little nibs that remained through a juicer.

The beans, by then a lumpy brown mass that smelled vaguely of burned peanut butter, were poured over the granite wheels of a countertop wet grinder originally intended to help cooks in India turn rice and dal into batter for idli and dosa.

The grinder would hum for the next 24 hours to refine and conch the chocolate, pumping the smell through the house. And they weren't even to the hard part yet.

"There is no rational reason for doing this," Louis Cahill said, popping a chocolate bar out of a plastic mold. "It's insane, if you think about it." (The cost of a homemade bar can be twice what you'd pay for a high-quality bar at retail.)

The Cahills are part of a small but growing cohort dedicated to making chocolate at home, a pursuit rooted in the proliferation of American-style, bean-to-bar chocolate. Like beer, cheese and coffee before it, chocolate has captured the attention of those interested in making small batches of food and drinks using traditional methods with ingredients purchased as close to the source as possible.

This second wave of modern American small-batch chocolate - the first came in the 1990s, with bean-to-bar manufacturers like Scharffen Berger in San Francisco - took off in the middle of the next decade. One recent census, by The Ultimate Chocolate Blog, put the number of professional craft chocolate makers at about 90, but others in the business think the total would easily top 100.

Jerry Hoffmeister tempers a batch, which gives the chocolate its snap and shine, as his nine-year-old daughter Rebecca, center, and her friend Natalie Fawcett-Long watch, in Seattle, Jan. 30, 2015. Like beer, cheese and coffee before it, chocolate has captured the attention of a small but growing cohort of people is dedicated to making chocolate at home.

Their ranks are growing, as is interest by large chocolate manufacturers in improving the quality of their offerings in a country where the taste for dark chocolate has been notching up each year, according to Mintel, the market research group.

As a result, stores are filled with bars that read like wine labels, with single varietals and varying degrees of sugar-to-cacao ratios. Still, the small but growing cadre of kitchen-counter chocolate makers will tell you it never tastes as good as a bar you have produced in your own kitchen, even if the hobby can cost $500 to get started and requires days of attention.

"Eating your own chocolate and giving away chocolate I have made myself is one of my great pleasures," said Tom Rosenbauer, a chemistry buff who makes batches frequently in his Vermont kitchen.

His family loves chocolate, but his son has a peanut allergy. Finding bars that hadn't been made in a kitchen that also processed peanuts was hard, so he decided to try to make his own. Rosenbauer makes his living in the fly-fishing business. On the obsession spectrum, home chocolate makers and people devoted to tying flies are not really that far apart.

Louis Cahill, a photographer and angler, also makes his living in the fly-fishing business. When Kathy Cahill suggested they take on chocolate as a project as a way to make Christmas presents last year, the couple turned to Rosenbauer for some informal coaching.

It didn't seem all that daunting. Kathy Cahill's previous projects have included making her own face lotion and soap.

"This is super easy compared to soap," she said.

Chocolate is nothing more than two ingredients: cacao beans and sugar, and some people leave out the sugar. Others add milk powder, more of the fatty cacao butter already locked inside the nibs or a host of flavors and crunchy or savory bits. Using nothing but time, temperature and grinding to turn bitter beans into something with all the nuance and terroir of wine is an inexplicable piece of kitchen magic that a home cook can't find just baking a cake.

Jerry Hoffmeister, a systems engineer in Seattle who also loves the challenge of growing orchids from seed, makes a batch of chocolate every couple of months. He recently did a demonstration at his synagogue. About 50 people showed up.

"I think they came because making chocolate just seems so mysterious," said Betsy, his wife, a lactation consultant whose culinary pursuits tend toward baking challah and making jams.

Hoffmeister uses a wet grinder he bought online. He skips a step or two and uses a microwave instead of a water bath to get the correct temperature for tempering, which gives chocolate its snap and shine and seems fraught with peril.

"When you are in there tempering, your heart is pounding," Louis Cahill said. "There were a couple of times when we were doing it we were just yelling and freaking out."

The Cahills go more strictly by the book than Hoffmeister. They bought a melanger, whose roots are in the Indian kitchen but which has been modified so it can handle the long hours of continuous grinding necessary to reduce the particle size of the sugar and cacao solids and to bring out the flavor and silky mouth feel.

The man who sold it to them was John Nanci, a retired organic analytical chemist in Eugene, Oregon, whom many consider the godfather of kitchen-counter chocolatiering. He started the Chocolate Alchemy website in 2004, mixing commerce and coaching with hard science and mysticism. He is dedicated to what may be called open-source chocolate-making. His business really took off in 2009; both commercial and home chocolate makers go there to get advice and buy beans and equipment.

Nanci, who brews his own beer and has the Tartine bread starter on his counter, got into chocolate after he began roasting his own coffee beans. At a gathering of like-minded coffee obsessives a dozen years ago, a man he knew as Oaxaca Charlie showed up with some cocoa beans and mixed them into a frothy drink.

"It was like, oh, my God," he said. "I remember thinking: 'This is so alive. There are so many more flavors to chocolate than I ever imagined. I wonder if I can do this?'"

He couldn't find cacao beans anywhere. After several months, he talked an importer into selling him 150 pounds of beans from Ghana. He started reverse-engineering chocolate, fueled in part by professional chocolate makers who said it couldn't be done at home.

"I just worked on each piece of the puzzle until - boom - it was there," he said.

Nanci pioneered the use of a hair dryer for the process of removing the hulls, called winnowing, and discovered that the electric Indian wet grinder would be perfect for chocolate if it didn't overheat during the long conching process. He contacted Santha, a manufacturer, and promised he could sell 100 of the machines if the company made some modifications.

He also worked for a time with Andal Balu, a retired botanist, and M. Balasubramanian, a retired chemist, who runs a company in Roswell, Georgia, that specialized in Indian grinding equipment. They created CocoaTown seven years ago "when we saw that chocolate went from sin food to super food," Balu said.

At first, they sold mostly to commercial chocolatiers, but their customer base has shifted to include home cooks.

"In the last couple of years, 90 percent of calls we get now are from people who have never made chocolate in their lives but they have seen other people making it and they get excited," Balasubramanian said.

Professional American craft chocolate makers are cheering on the home chocolatiers, because that's how many of them got their start. Scott Witherow, who created the well-regarded Olive and Sinclair chocolate company near Nashville, Tennessee, is one of them. He has carved out a Southern niche, using brown sugar instead of white, adding Allan Benton's bacon to some bars and taking the oft-shunned white chocolate to a new level with the addition of buttermilk.

"I was buying stuff from all over with different percentages and origins, and I thought, 'Why can't I just make this stuff myself?' " he said. His first batches were terrible, so he has a lot of sympathy for people trying to figure it out at home.

So does Dan Brown, who along with his wife, Jael, makes and sells French Broad Chocolates in Asheville, North Carolina. Although their empire has expanded to include a shop stocked with some of country's best craft chocolate, a pastry shop and a working cacao farm in Costa Rica, Brown does not forget the thrill of making his first batches of chocolate at home.

"It is one of the most exciting things," he said. "It might not be world class, but you freaking love it because you made it yourself."