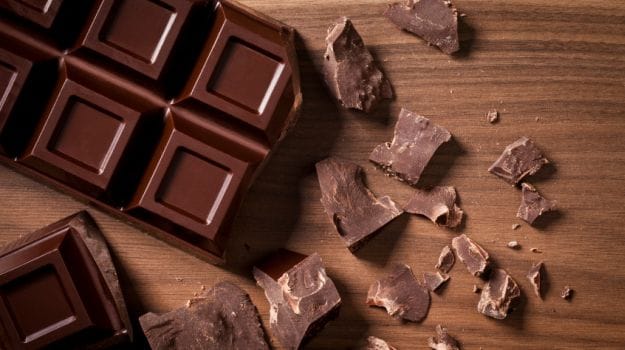 Highlights
If you're one of those people who love dark chocolate, the ones with cacao content over 60% and a bitter-sweet (mostly bitter) taste, then we've got good news. Chocolates are made from parts of the cacao tree which in Latin is known as 'Theobrama cacao' and derived from the Greek words 'theo' which means god and 'brosi' which means food. That literally translates into 'food of the gods'. No wonder you can't turn your back on chocolate! Once you get past the mind-blowing taste of chocolate that almost consumes you, you'll find that it actually borders on the realm of health foods. Raw, processed cocoa beans have exceptionally high antioxidant properties and dark chocolate comes real close. Dark chocolate is made from raw cocoa beans which are a rich source of Flavanols, a sub-category of a larger group of Phytochemicals known as Flavanoids which are essentially antioxidants. What Flavanoids essentially do, is work against free radicals by inhibiting negative changes in the body.

The flavanols are bitter in taste so the less bitter your chocolate is, the more stripped it is of all these antioxidants. It's these flavanols that improve vascular function, improve cognitive function and provide ultra violet protection for the skin. Dark chocolate also has high concentration of an alkaloid called theobromine, which is found in coffee as well. Theobromine has stimulant properties and relaxing effects. It can dilate the blood vessels and lower blood pressure. And if that wasn't enough, dark chocolate is also rich in soluble fiber, antioxidants, fiber, iron, magnesium, copper, manganese, potassium, phosphorus, zinc and selenium.

Yes, it's true that dark chocolate is high in both fat and calories but it's not the kind of fat that'll steer you towards obesity but the good kind of fat that'll help your body. Dark chocolate is made with cocoa butter which is different (in terms of its fat properties) from other kinds of oil and butter. It consists mainly of stearic acid, palmitic acid and oleic acid. Stearic acid and palmitic acid are both saturated fat but unlike most saturated fatty acids, they don't raise blood cholesterol levels. And oleic acid is a kind of monosaturated fat which could even help lower cholesterol. The level of saturated fats in chocolates goes up when milk is added to it, which is why dark chocolates are much healthier in comparison.

If taste wasn't reason enough for you to gorge on perfectly shaped cubes of dark chocolate then here are 6 other amazing reasons.

Studies show that moderate amounts of dark chocolate can lower LDL which is bad cholesterol and raise HDL which is good cholesterol. This in turn helps reduce the risk of cardiovascular diseases and a stroke. Here's how: LDL builds up along the inside of arteries, forming plaque deposits and narrowing arteries. This condition can lead to a heart attack. So if dark chocolate can reduce LDL, they can eventually reduce the risk of a heart attack.

It can help you focus, sharpen your memory and protect your brain from ageing. In 2012, researchers at the University of Nottingham found that eating dark chocolate boosts blood flow to some key areas of the brain for a few hours at the least, which directly leads to increase performance in tasks and general alertness. Another 2013 study published in the journal Neurology found that eating dark chocolate daily (in moderate amounts of course) can boost your memory by almost 30% and also up your problem solving skills.

Dark chocolate can help you focus, sharpen your memory and protect your brain from ageing
4. Improves Heart Health

A 2015 study found that dark chocolate promotes a healthy heart. The study done by researchers at the Wageningen University in Netherlands found that dark chocolate restores flexibility to the arteries and at the same time, prevents white blood cells from sticking to the walls of the blood vessels. In 2014, another study that was presented at the American Chemical Society (ACS) found that when you eat dark chocolate, the gut bacteria in your stomach ferments it into anti-inflammatory compounds that are good for the heart. A 2015 study published in the Journal Heart, suggests that a substantial amount of chocolate every day can lower cardiovascular disease and stroke risk.

Promoted
Listen to the latest songs, only on JioSaavn.com
(Also Read: 6 Amazing Benefits of Honey and Cinnamon)

Research proves that dark chocolates have high satiety value and therefore they make you feel full for a longer time. They are packed with MUFA'S (monounsaturated fatty acids) that are known to boost your metabolism and burn fat. When eaten in moderate quantities, dark chocolate is known to slower the digestion process and curb cravings.

6. Keeps Your Weight in Check

CommentsA 2012 study conducted by the University of California looked at the diet of 1000 Americans found that those who ate dark chocolate a few times a week were on an average, slimmer than those who ate it occasionally. The researchers went on to say that even though dark chocolate is loaded with calories, it contains ingredients that may favour weight-loss. Another study said that if you eat dark chocolate as dessert after your meals, it is likely to curb weight gain.