The Latest: Obamas Cheered on Arrival at Waikiki Restaurant

A crowd of mostly tourists cheered as President Barack Obama and his wife Michelle arrived at a Waikiki restaurant Thursday night. 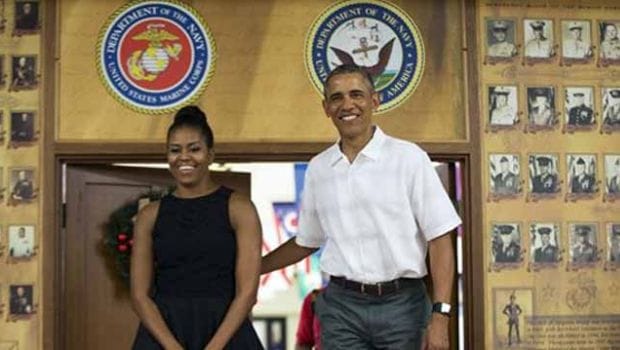 A crowd of mostly tourists cheered as President Barack Obama and his wife Michelle arrived at a Waikiki restaurant Thursday night.

The couple dined with friends at Mahina and Sun's, which focuses on island cuisine.

The presidential party traveled by motorcade to Waikiki from their vacation home in Kailua, about a 35 minute trip.

Earlier in the day, the first family along with some companions soaked up the sun at the beach at Bellows Air Force Station.

President Barack Obama and the rest of the first family are spending the afternoon with friends at the beach at Bellows Air Force Station.

The president's motorcade arrived at Bellows in the sleepy town of Waimanalo on Oahu's east coast shortly after 11 a.m.

The Air Force station opened as the Waimanalo Military Reservation in 1917 and was renamed Bellows Field in 1933 after 2nd Lt. Franklin Barney Bellows, a hero of World War I. Since the last runways were closed in 1958, the base has been used primarily as a recreation center for the armed forces.It is the Obamas' third visit to Bellows during their annual holiday vacation on Oahu.

President Barack Obama is starting the day with his usual morning workout at the Semper Fit gym on Marine Corps Base Hawaii.

Obama arrived at the Kaneohe Bay gym at about 8 a.m. The president's motorcade passed about 20 residents, who waved and took video with their cellphones on the way from his Kailua rental home to the nearby base.

Early-morning showers have given way to mostly clear skies and a heavy dose of sunshine on the East side of Oahu.

It is the 13th day of Obama's annual holiday vacation to his home state of Hawaii.