On Air Force One, No Lightening Up On Burgers And Cake 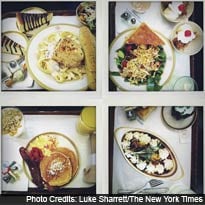 Such was the fare served to passengers aboard Air Force One during a particularly grueling three-state day on the campaign trail just before the 2012 election. Not much has changed since.

"It's American fare, in that it's not going all arugula on people," said Arun Chaudhary, who was President Barack Obama's videographer from 2009 to 2011. "It's not aggressively nutritious."
To say the least. The food on Air Force One is well known among White House staff members and reporters for being plentiful in quantity and broad in appeal, but not always the perfect mirror of the nutritional recommendations coming out of the office of the first lady, Michelle Obama, who has made healthy eating and living her mission.

According to the Agriculture Department's MyPlate guide, unveiled by Michelle Obama in 2011, fruits and vegetables should make up half of a meal. (White potatoes alone will not do the trick, as the first lady wrote in a recent editorial.) Michelle Obama has also emphasized the need to reduce the consumption of sugar, salt and fat in her fight to improve school lunches as part of her Let's Move initiative against childhood obesity.

It is unclear whether Michelle Obama has urged extending those standards to the president's plane, where the meals are prepared on board by enlisted Air Force personnel who have credentials from military and civilian culinary schools.

The White House directed questions about the meals to Air Force One officials, who declined to comment on whether they had spoken with Michelle Obama about the food they serve. But they wrote in an email that healthy food had always been on the menu and that they strove to tailor the cuisine to the standards of Let's Move.

"I've got to imagine the only thing tougher than getting elementary school kids to eat healthy is getting a cabin full of reporters to do the same," said Sam Youngman, who covered the White House for the newspaper The Hill during the early days of the Obama administration.
Some reporters and staff members praise the cuisine on Air Force One, as well as the flight attendants who remember frequent fliers' dietary restrictions and are happy to slip a sandwich to those unsatisfied with the menu.

"They seem to be pretty well-rounded meals," said Jared Favole, a former reporter for The Wall Street Journal who particularly enjoyed the yogurt and granola sometimes served on morning flights when he was covering Barack Obama.

Many others dismiss questions about the food's nutritional value by pointing out that grapes, apples and other fruit are always available in bowls in each cabin.
And there is no fryer on board, although for safety, not health, reasons.

"While everything is pretty much top-notch, the fries are always soggy," Chaudhary said.
The menu tends to reflect the preferences of the president, who generally eats the same thing as the rest of the travelers, said Mark Knoller, a CBS News correspondent who has reported on every president since Gerald R. Ford.

Jim Watson, an Agence France-Presse photojournalist and "picky eater" who subsists on peanut butter and jelly sandwiches on presidential trips, said George W. Bush's plane featured more meat and potatoes. One day in 2002 when Bush was in Florida to promote fitness, the official Air Force One lunch, printed on gold-edged menu cards for every passenger, consisted of a corned beef sandwich, steak fries and strawberry cheesecake. (Bush ordered off the menu that day, choosing egg salad on toast.)

Ronald Reagan was always popping jelly beans, a habit that spread to others on his plane, said Kenneth T. Walsh, a journalist for U.S. News & World Report who wrote a book about Air Force One. And before going vegan after leaving office, Bill Clinton had a well-known fondness for burgers and fries.

But there is one person who can overrule the president, Knoller said.
"You could tell by the food whether Mrs. Clinton was on the plane," he said, meaning salad and other greens were on the menu.

Promoted
Listen to the latest songs, only on JioSaavn.com
Chaudhary, who estimates that he flew on Air Force One about three times a week, said the Obamas' taste for healthier fare had in fact shaped some of the current menus. He said the president enjoyed more nutritious food like salmon, almonds and broccoli (unlike the elder George Bush, who banned the mother-approved vegetable from his plane). Barack Obama also has a soft spot for Honest Tea, a low-calorie, caffeine-free drink - Black Forest Berry flavor, to be specific.

The Obamas indulge in burgers and pizza, and on occasions when the motorcade passes a restaurant that boasts the world's best wings, for example, Obama may ruin his dinner along with his sauce-drenched staff members, Chaudhary said. "He's like the rest of us," he said.