The Lunchbox - Why Karan Johar had no Friends? 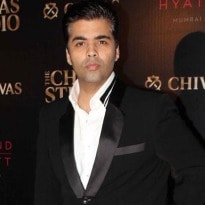 Filmmaker Karan Johar, who is presenting a film titled "The Lunchbox", has revealed that during his school days, he neither used to share his lunchbox with anyone nor did he eat anyone else's food. And that made him unpopular in his class.

He says he was wary of leaving "yellow" marks on his notebooks.

"They (students) used to share their food and most Gujaratis have yellow things in their food, So everything was yellow and I didn't want my hands to become yellow! So I didn't eat with them because then I thought yellow would come onto everything," the 41-year-old said here Friday at the press conference of "The Lunchbox".

"All those students had yellow books and I was so scared that my books would become yellow, that I refused to eat with them. So I got the reputation of being a snoot because I would eat my own lunchbox and I never wanted to share my dessert," he added.

Promoted
Listen to the latest songs, only on JioSaavn.com
Karan says ultimately found a friend who has been with him till today, Dharma Productions' CEO Apoorva Mehta.

"No one wanted to be my friend because of my lunchbox because I never shared my lunchbox. One day the principal walked in and said no one is friends with Karan Johar, who will be his friend? My CEO today put his hand up there and said, he will," he said.