The Pound Cake: It's History and What Makes it a Classic Dessert

Every name of a dish has a history and a story to tell. Ever wondered why a pound cake is called a 'pound' cake? Let's find out. 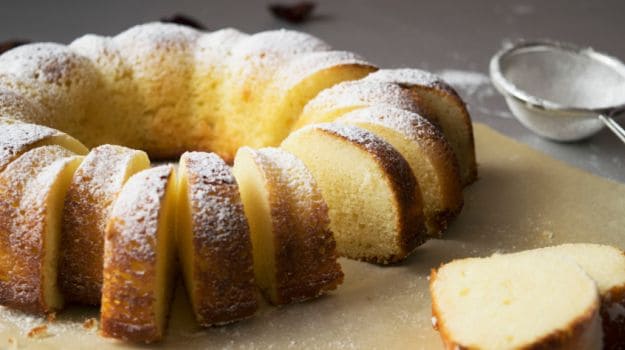 We all crave for the chocolatey truffle pastry, the beautiful red velvet cake or the absolutely flawless blueberry cheesecake every once in a while, but the basic vanilla pound cake stays an all-time favourite. It's the most basic, tastiest as well as the easiest recipe. However, has it ever occurred to you why a pound cake is called a 'pound cake'? Every name has a history, every name tells a story. A chocolate chip cake is named that way as two of the major ingredients in the cake are cocoa powder and chocolate chips. But why 'pound' cake? Does it weigh a pound? Let's find out.

The origins of pound cake lie in Northern Europe and date back to the early 18th century. Initially, the pound cake weighed four pounds; that rules out the possibility of it being named after its weight. The ingredients in the cake, however, were measured up to one pound. This is how it was traditionally made - a pound each of these four ingredients - butter, flour, sugar and eggs. The name pound cake has stuck around ever since.

Due to the traditional measurements of ingredients used in this cake, the size is such that it becomes possible to serve multiple families at a go. The modern day families, however, prefer a lighter and smaller cake and therefore the original recipe has been modified overtime as per the requirements. Today, people use smaller quantities of each ingredient, but maintain the 1:1:1:1 ratio.

A lot of different variations of the pound cake exist now across various countries and regions, each one having their own distinct style. Originally, no leaveners were used in the cake except for the air whipped into the batter. It was only in the 1900s that artificial leaveners like baking soda and baking powder were added to reduce the density of the cake. Other variations include the addition of flavouring agents like vanilla extract/almond extract or dried fruits such as cranberries or currants. At times, some or all of the butter was substituted by a cooking oil/vegetable oil to get a moist cake. One of the most popular variations is the sour cream pound cake of United States. The butter is substituted by sour cream to moisten the cake and also get a tinge of a tangy flavour. Despite these variations which alter the characteristics and the flavour of the cake drastically, the name 'pound cake' is often used.

Pound cake is quite well known in France and is called 'quarte-quarts', or 'four quarters', a quarter referring to a pound. The Carribean part of the world that speaks French add Rum to the cake for Christmas eve along with mashed bananas. The Venezuelan and Colombian version of the Pound cake is called ponque which is a Spanish phonetic approximation of the term. It is essentially a wine drenched cake with cream/sugar coating. The Mexican version is called panque and it follows the traditional recip - a pound each of butter, flour, sugar and eggs