The Raw, Dark Truth About Chocolate 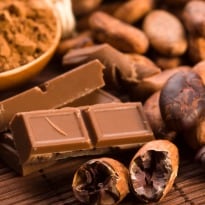 It was once considered a snack that made you pile on pounds. Then its reputation got a drastic makeover. It became a snack that not only made you feel better, but had curative and restorative properties too.

Chocolate, especially the dark variety, is now touted as a must-have, and now raw chocolate is being looked upon as a super food. Is it really? First, let's go back to the basics.

How is chocolate made?

Chocolate comes from the beautiful bean of the theobroma cacao tree whose name literally translates into 'Food of the Gods'. Cacao beans are roasted and ground to produce cocoa and, after further processing, it forms the base of chocolate.


What is raw cocoa?

When the beans are dried at low temperature, they are called raw cacao beans, which can then be consumed whole, broken into pieces (nibs) or ground to produce raw cocoa powder. Pure, unadulterated and raw, this bean today is being looked upon as a superfood.

According to ancient Mayans, cocoa had the power to make you immortal. Even if that was stretching it a bit too far, cocoa has been more than just a food. Throughout history cocoa has been seen as a currency and even a medicine.

And raw unprocessed cocoa is considered superior since it has not gone under chemical processes. But when you use that raw cocoa to make chocolate, and add refined sugars and milk and stabilizers, all that decreases the goodness of cocoa.

It is one of the richest sources of antioxidants and we know that antioxidants help you fight free radicals in your body.

Magnesium helps to build strong bones and is a muscle relaxant associated with feelings of calmness.

It has more flavonoids than most foods. A Mayo clinic health letter says that these flavonoids play a protective role in heart health. Some studies suggest that flavonoids absorb UV light and help the skin to glow. I can see many women smile at this. By the way, do keep in mind, the darker the chocolate, the more the flavonoids.

But if you don't want to think about health benefits every time you open a bar of a chocolate, there is the feel-good factor. Enough is written about how chocolate makes you feel good, releases serotinins and acts as a mood lifter.


But wait! Is it all good news?

Recently some studies are suggesting that raw cacao contains over 300 naturally occurring chemicals and many of them are detrimental to the human body and mind when consumed on a regular basis. Many of them could be considered toxic.  Some of the most potent, harmful and disconcerting include theobromind, theophylline and caffeine.

It is also said to be high in oxalic acid that restricts the absorption of calcium.
Others say that the chemicals in raw cacao are actually much more potent than processed chocolate, because they are presented to us in a raw form.

Cacao is certainly a controversial subject in the raw food movement and there are many different ideas about how it affects our health. I guess it wouldn't be wise to consume copious quantities of dark chocolate, thinking your heart will beat faster and better.

CommentsHave you ever had a bar of raw chocolate?