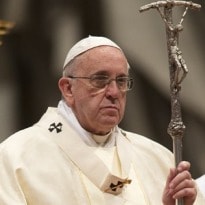 Pope Francis is opening the doors to an earthly paradise - the working farm at the papal summer residence that produces dairy products, meat and vegetables for the pope and his staff. The Vatican is planning to open the farm at Castel Gandolfo for the public next year, after finding success with its guided tours of the surrounding gardens, fountains and Roma-era archaeological treasures that can be found on the sprawling estate located 25 kilometers (15 miles) south of Rome.

Francis has decided not to use the hilltop retreat overlooking Lake Albano, preferring to stay put in his suite at the Vatican hotel during vacations. The last time the palazzo was used was when Emeritus Pope Benedict XVI took up residence for a few months after his dramatic resignation in 2013.

Soon, the public will be able to see the free-range hens housed in a majolica-decorated chicken coop, the ostriches, turkeys, rabbits and 80 cows that feed Francis and his staff at the Santa Marta hotel. "We wait for the order from Santa Marta and proceed according to that order and put together a special basket for the Holy Father that reaches his table and his kitchen.," said Osvaldo Gianoli, who runs the villa.

Pope Pius XI had the farm built between 1929 and 1934, and it still operates according to the agricultural methods of the time. It's not an organic farm, but works with natural fertilizers. Synthetic chemicals are used only when strictly necessary, Gianoli said.

Eight people currently tend to the animals and vegetable patch where potatoes, zucchini, tomatoes and other produce are grown. One of the staffers, Emilio Scarsella, has been here for 33 years and served four popes. "For them I made milk, yogurt, mozzarella, butter, fresh cheese", Scarsella said, as he lifted a mound of cheese from its water.
Listen to the latest songs, only on JioSaavn.com
The Castel Gandolfo complex has three villas, including Villa Barberini, the gardens of which were built over the residence of Roman Emperor Domitian. In all, the estate extends over 55 hectares (135 acres), significantly larger than the Vatican itself, which occupies 44 hectares in central Rome.

Francis himself wanted the Villa Barberini gardens to open to the public, and since its March opening some 8,000 people have passed through. Gianoli says that while plans aren't final yet, he hopes to add a visit to the farm and a more comprehensive visit to the gardens "and, why not, even the possibility of tasting our products."