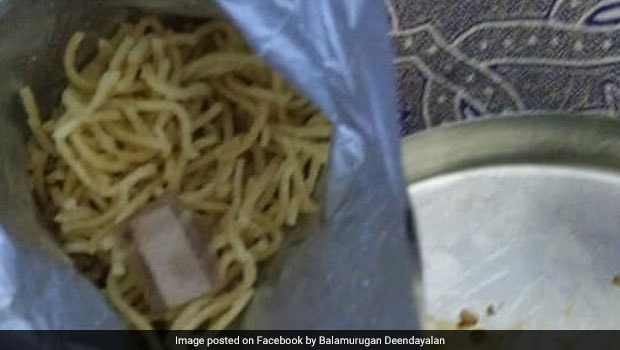 A growing number of urban Indians are relying on food delivery apps to get their daily meals. In such a scenario, when there is a lapse in hygiene or any such issue, it creates quite a furore. After a video of a Zomato delivery executive eating customers' food went viral, some pictures of a blood-stained bandage found in a pack of food ordered using another popular food delivery app, Swiggy. A Chennai man posted the pictures of the food pack allegedly ordered through Swiggy on the latter's Facebook page with his complaint. The man alleged that he had ordered chicken schezwan chop suey from a restaurant in his city, using the Swiggy app and that he discovered that the food was contaminated, after he finished off half the portion of his food. The pictures of the blood-stained bandage lying amidst the noodles have gone viral and the food delivery company has reportedly responded to the incident.

"Found blood-stained bandaid in Chicken Schezwan Chop suey ordered through Swiggy, disgusting!" wrote Balamurugan Deendayalan on Swiggy's Facebook timeline. Further narrating his ordeal, he wrote that following the discovery, he contacted the restaurant, but no response or any offer of replacement was forthcoming from their side. He further said, "Tried to contact Swiggy, no option to call them directly through app for already delivered food and only option is to chat but they aren't responding either!"

Here's the post by Deendayalan that has since gone viral:

Swiggy replied to the man's post, asking him to inbox his complaint and added by saying, "We assure you, we will definitely carry out a stringent investigation on the restaurant to find out what caused the mishap." Another comment left by Siwggy on the post said, "We'll surely work on improving the services going ahead & we'll ensure that none of our customers face any such issues while ordering with us." Swiggy has further stated that they have suspended the outlet, after this incident came to light and has even assured its customers that the food delivery app conducts "hygiene audits across our restaurant partner network with an agency."

It's uncertain whether these statements will be able to allay the customer's fears and restore their faith in restaurant takeouts. Is Swiggy's response reassuring for you? Let us know in the comments section below!