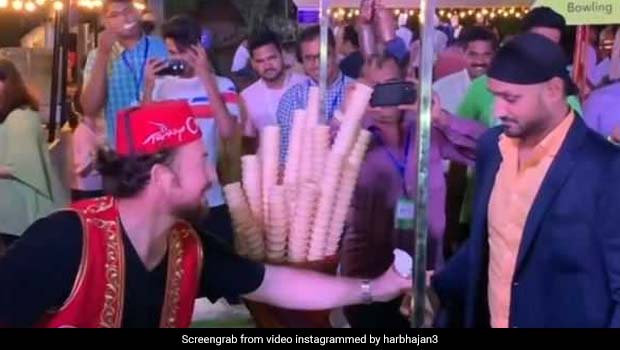 Indian off-spinner Harbhajan Singh is known for his jolly attitude that is loved by millions of Indian around the globe. The 38-year-old recently made headlines for his candid interview with former Miss India and Bollywood actor Neha Dhupia. The Indian international cricketer revealed some interesting tidbits from his life in the episode of the popular talk show web series, including the story of how he approached his wife, Geeta Basra, and asked her out on a date. The couple who have a cute little daughter together, got together when 'Bhajji' spotted Basra on a film poster and was intrigued enough to ask around about her. Harbhajan had revealed in the interview that the couple met for dates for about eight or nine months, before they decided to be in a relationship with each other and the rest is history. The dapper couple also turned quite a few heads when they posed for pictures during the wedding parties of Isha Ambani and Anand Piramal.

Coming back to Harbhajan Singh, the cricketer is quite a foodie as is evident from his social media timelines. He often posts pictures and videos of himself enjoying dinner and occasionally even cooking meals himself. Recently, at an event in a Mumbai hotel, Bhajji encountered a Turkish ice-cream seller, who tricked him with his amazing serving skills, leaving the cricketer quite amused and flustered. Harbhajan posted a video of the hilarious performance of the Turkish ice-cream seller on his Instagram and it has got thousands of views since.

Take a look at the hilarious video of the Turkish ice-cream seller tricking Harbhajan Singh:

We can't get over the extremely funny expressions on Harbhajan's face! If you are an avid internet and social media user, you have seen similar videos of Turkish ice-cream sellers performing tricks and trolling unassuming customers, much to the latters' amusement and general entertainment. The sellers, usually sporting a Turkish fez, a vest and a moustache, are more performers and tricksters than servers and are notorious for playing tricks with the customers. Although we're not sure if there is a cultural reason why Turkish ice-cream sellers choose to play tricks with customers, we sure think they're incredibly entertaining to watch. We're pretty sure even Harbhajan Singh agrees with us!