Nearly Two Decades After Ban, Irish Beef is Back in America 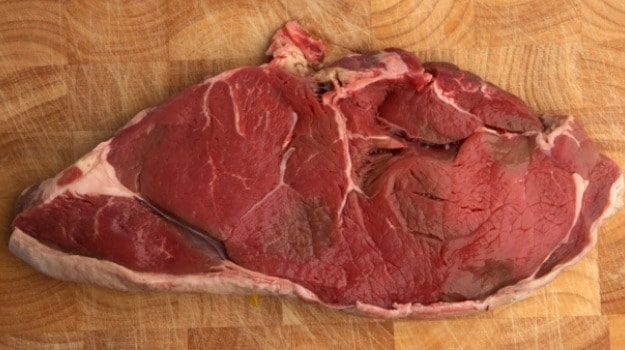 Barred in 1998 at the height of the Europe-wide 'mad cow disease' crisis, the grass-fed beef is set to reappear on American shores in March.

Irish beef was served in New York City for the first time in 17 years on Monday night, after a ban in 1998 saw all European beef restricted from entry into America.

At a swanky event in Manhattan's Upper East Side, Ireland's agriculture minister, Simon Coveney, presented a sample of his nation's beef to a crowd of chefs and food writers, and presented the case for Irish beef filling the huge American demand for red meat.

"The average American eats twice the volume of beef per head to the average European. So you take your beef very seriously," Coveney said.

"If we are to be serious players in this market, we need to prove to you that we take our beef seriously," he continued. "And we do."

Monday's event was held at Daniel, French chef Daniel Boulud's two-Michelin-starred restaurant, which prepared a series of dishes with Coveney's beef as a demonstration of its flavour.

"It does taste a little bit different to US beef," Coveney told the crowd. Irish cattle are grass-fed, the minister said, and happily for Ireland "the fastest growing segment in the beef market in the US is actually the green beef, or grass-fed".

The Irish beef last served in the US would be old enough to drive by now, had it the necessary appendages and wherewithal. The US imposed a Europe-wide ban on all beef on 1 January 1998, at the height of the BSE, or bovine spongiform encephalopathy (aka "mad cow disease") crisis.

That ban was lifted in November 2013, but individual countries had to open themselves up for inspection by American authorities before they could begin exporting their beef. Ireland was the first to be given the green light, in January this year, and will start to ship its meat in March.

Karen Shu, executive chef at ABC Kitchen, Jean-Georges Vongerichten's popular Manhattan venue, was among those to try the Irish beef.

"So far I think it is buttery, soft, a lot of flavour," she said. "It's a lot fattier [than American beef], so there's more texture."

Asked if she would stock Irish beef in her kitchen, Shu said: "I would if it was my own restaurant. But we try to stay as local as possible."

Pierre Landet, executive chef at Felix, a French restaurant in Manhattan's Soho neighbourhood, said he uses mostly American beef, but was impressed by the Irish variant.

"It's very different," he said. "American beef can be very beefy, more lean.

"Now we have to check out the price."

Summing up the Irish offering, Coveney was keen to stress that the beef is healthily farmed, positioning it to meet a growing demand among consumers to know where their food came from. "We are not here to sell you an ordinary piece of meat. We want to sell you a product that tastes great, that we can tell you where it comes from in terms of the family that produced it, and where that family lives.

"We want to be able to tell you the carbon footprint of the animal that produced that steak. And most importantly, we want you to sit down and taste it and say: 'That's different, and that's great. And that's from Ireland.'"

Irish beef: grass-fed, and available in the US from March. Photograph: joefoxfoodanddrink/Alamy