A 14-month-old McDonald's burger was eaten by Matt Davin in a step-by-step video on his YouTube channel by the name 'Beeper Beef'. 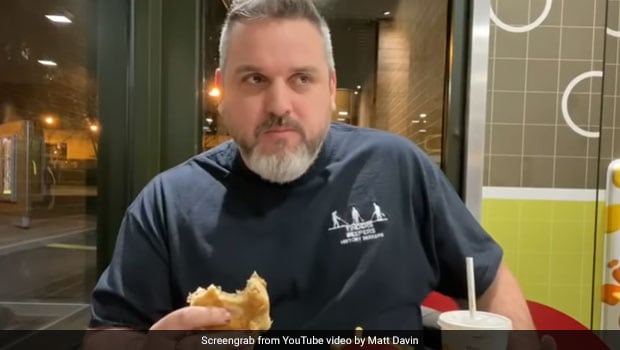 There are many people who are obsessed with food. But being obsessed with decayed and rotting food is truly unheard of. YouTuber Matt Davin, who hails from South Yorkshire, United Kingdom, took it upon himself to take up what he called the 'McDonald's 365 Challenge' for his 40th birthday. He took an extreme step by buying a meal from McDonald's on his 39th birthday in November 2018 and then burying it in his friend's garden, to be retrieved a year later on his 40th birthday.

Matt Davin, however, got delayed by two months and only recovered the burger in February 2020. He then took out the burger from his friend's garden and dusted it off. The 14-month-old burger was then eaten by the YouTuber in a step-by-step video documenting the entire eating process in a video on his YouTube channel by the name 'Beeper Beef'. Take a look:

Did he or did not manage to consume the entire burger? The shocking video shows him actually finishing the mouldy burger, as well as the fries and shake that were buried with it. He gagged a few times in the middle of when he was eating the burger, but he managed to finish it off. He told the camera in the YouTube video that he had taken up a few weird food challenges since college, which was where he thought it all started. "I remember seeing something where someone had preserved a McDonald's meal for years so I decided to take it a step further and eat it," said Davin in the video.

As for reactions to the video, several YouTube users poured in their responses to the video. A user said, "News flash, New Mac' corona virus found in England," while another encapsulated popular opinion and said, "If you don't get food poisoning it will be a miracle." But surprisingly, Matt Davin commented that he was absolutely fine after eating the meal and had no side-effects.

Would you try to make such a food record? Tell us in the comments below!

Chinese Restaurant's Unique Menu Goes Viral; We Bet You've Never Seen A Menu Like This One
Diljit Dosanjh Loves This Versatile Herb In His Dishes; Can You Guess?