Why Saffron is Good for You 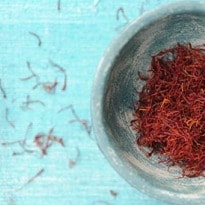 Saffron has long been used in traditional healing and research suggests it could become part of mainstream medicine's weaponrydship day?

No spice is more special than saffron. Its scent is haunting, its unmistakable flavour earthy yet aristocratic and subtle. It straddles sweet and savoury effortlessly, and it bestows a striking golden hue on every dish it graces. A few strands of saffron will transform a long list of dishes, adding an x-factor to everything from risottos and milk puddings to rich curries and fish stews.

Avoid the powdered sort: it's liable to fraud and adulteration and generally disappoints. Get the maximum from your saffron stigmas (strands) by warming them very gently for a few seconds, pounding them lightly and then infusing them in liquid for a minute or two to help release their glorious colour and aroma.

Why is saffron good for me?

It has long been used in traditional medicine around the world, and modern scientific study suggests that saffron could also have a role to play in fighting disease. Research suggests that the carotenoid compounds responsible for saffron's striking colour (safranal, crocetin, crocin) could play a part in inhibiting the growth of tumours. The active constituents in saffron could help alleviate gastric problems, heart disease, insulin resistance, depression, premenstrual syndrome, insomnia and anxiety. Eating saffron also appears to help vision by retarding the degeneration of the retina that occurs with age.

Where to buy and what to pay
Saffron is infamously expensive, but as just a pinch of good saffron will enliven a dish, it won't break the bank. Cheap saffron is a bad deal. Guide price: £4‑£4.50 per 0.5g. Steenbergs sells Iranian Fairtrade saffron (£4 per 0.5g)

Joanna Blythman is the author of What To Eat (Fourth Estate, £9.99). To order a copy for £7.99 with free UK p&p, go to guardianbookshop.co.uk

This delicious recipe was part of the pudding repertoire when I worked at the Carved Angel. It has since become a firm favourite on my menu. It works well with many fruits, so it's a year-round recipe. Some fruits, like the gooseberries, will need to be cooked a little first but others such as currants can go straight in. Balance the sugar accordingly.

1 Preheat the oven to 160C/325F/gas mark 3. Put the gooseberries into a bowl, add the sugar and 2 tbsp water and mix, so the sugar is coating the fruit. Divide the gooseberries between four ramekins and stand them in a roasting tin. Cover with foil and place in the oven for about 7-10 mins until the fruit just softens a little. Turn the oven down to 140C/275F/gas mark 1.

2 In the meantime, whisk the egg yolks, cream, honey and saffron. Place the bowl over a pan of simmering water, making sure the base of the bowl isn't in contact with the water. Stir gently for about 10 minutes, until the mixture coats the back of a spoon.

3 Strain the custard over the gooseberries. Fill the roasting tin with warm water to about halfway up the ramekins. Bake for about 45 minutes to an hour until just set.

4 Leave to cool for a few minutes before removing the ramekins from the tin and placing on a rack to cool.

Saffron has long been used in traditional medicine around the world. Photograph: Jill Mead for the Guardian